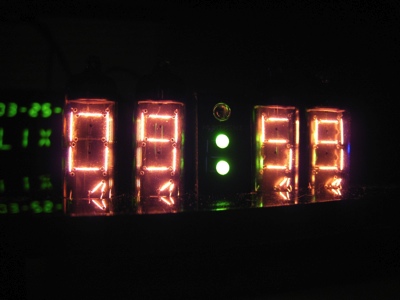 Numimini is a clock. It’s a clock that uses an obsolete display technology to create a unique item for your desk, mantelpiece or bedside table. But that’s a bit of an understatement, so read on…

Start by taking a look at the photos in the listing. Numimini uses four genuine Russian filament or numitron tubes to display the time - two for the hours and two for the minutes. The tubes are mounted on a little raised platform of shiny dark laser-cut acrylic which stands on four short legs. Between the digit pairs are a couple of tiny LEDs which act as a separator (and much more too, as you’ll see below…). The whole thing is crisp, modern and compact - just the thing for sitting on your desk, next to your monitor. Actually, it’s a great idea to put Numimini near your computer, because it’s designed to plug into a USB port…

And more of that later too, but for now, you’ll get the best impression of Numimini by watching it in action. Check out the YouTube video below. If the embedded video doesn’t work, go search YouTube for ‘Numimini’ - there’s only one such clock, so you’ll have no trouble finding it. Enjoy…

The video doesn’t really do the clock justice, particularly from a colour balance perspective. The numitron glow is a rich organic orange, and the two LEDs in the middle of the display show the whole spectrum of colours from red through green to violet and white. But anyway, you get the picture - we can play a lot of games with numitron tubes and a couple of LEDs. There’s serious work going on under the hood to make this happen - sitting at the heart of the whole operation is a powerful PIC microcontroller from the 18Fx550 family. It’s packed with about 18K of firmware that handles everything from USB communications to some intricate timed juggling to create the visual effects. Oh yes, and it displays the time too. So although you spend most of your time looking at the lovely tubes and hardware, I spent most of mine writing software!

Numitrons are based on the same principle as the standard incandescant light bulb - current passing through a wire in a vacuum heats it up to make it glow. But numitrons take the idea and push it a lot further: a light bulb only has one filament, and numitrons generally have seven or more which are independently controllable. Seven filaments arranged in the classic seven segment configuration allows us to have a tube which can display all ten digits. And that’s the purpose of the numitron.

Numitrons were one of the successor technologies to the beautiful neon discharge nixie tubes, emerging into general use around 1970. The two tubes are not dissimilar in appearance at first glance - a glass tube with lots of wires coming out of it. But electrically they are completely different. Nixies require high voltages, typically around 180V, which was convenient enough in the valve era, but awkward for the modern transistor circuitry and logic chips that were beginning to dominate. In contrast, the numitron is a low voltage device, with less than 5V being required to illuminate the filaments. As a result, numitrons began to be incorporated into new equipment designs in place of nixies.

However, they only flourished briefly, because at the same time the LED and LCD display technologies were developing as serious alternatives. And they had significant advantages over numitrons - they used much less current and had no fragile glass envelopes. So, it was not long before numitrons were rendered obsolete for most mainstream applications. As a result of this transient usage, numitrons were not manufactured in huge volume, and that means that the tubes are generally rare today - there are many fewer numitron types available now than there are nixies. The only place they seem to have survived in any numbers was in the Soviet Union, and that’s fading into history now too.

There are only two Russian numitron types that are still readily available from surplus sellers in the ex-Soviet Union. These are generally known in the West as IV-9 and IV-16 tubes. They are very similar devices - the only real differences are first that the IV-16 has a more compact shape; and second that the IV-9 has a decimal point indicator, whereas the IV-16 does not. Check out the photo for a side by side comparison. Of the two, the IV-16 is significantly rarer and more expensive.

Numimini can use both tube types, creating two different variants of the basic design. The IV-16 clock is slightly lower profile, and has a lighter look. The IV-9 version has some additional display options created by the presence of the decimal point indicator. But you have to look hard to tell them apart - both are beautiful little things. You can see that for yourself - the video clip on YouTube is of an IV-9 clock, and some photos in this listing are from an IV-16 unit. The tube type offered in this listing is specified below (but you may be able to change if it’s not the one you prefer - contact me to ask).

Telling the time is of course just the start of it. You’re going to be looking for your clock to cope with switching in and out of daylight saving (summer) time as the months go by. Maybe you get the odd power cut? Wouldn’t it be nice if you didn’t have to go and reset the time on the clock yet again when the power comes back on?

Numimini can help you out with these, and more. Here’s a very brief overview of the main features, some of which are discussed more further down the listing:

• Battery backed to keep time for months without external power.

• Nineteen different animations for the appearance or disappearance of digits

• Two independently controllable colon dots which can convey information in ten different ways, with a full spectrum of colours displayable.

• Five speeds for the digit display sequence - choose the one which suits you best.

• Two display styles for digits 6 and 9: modern or retro.

• Option to suppress leading zeros on the hours display.

• Control the clock from the USB port of your PC using a dedicated host application running under Windows XP.

• No tricky installation: the host application is a single standalone .EXE file which uses the built-in Windows HID driver.

• A demo mode to show off to your friends.

• Complete programming interface documentation and example source code provided so you can implement your own host application.

• Unique serial number and purchaser’s name burnt into the firmware and readable using the host application.

• All you need to add is the USB cable - that’s it! And I can even help with that if you like…

OK, so we have a clock which can tell the time, and has loads of features and display options. How do you get to play with them? Well, you need a computer, because Numimini is a USB device. Just plug the clock into a full-power USB port on your computer system (standard mini-USB cable not provided) and run the special host application program. This is a custom-written Windows application that allows you to control all of Numimini’s totally cool features. What’s more, there are no fiddly drivers to install because Numimini is a HID class device, which is something that all recent versions of Windows know how to talk to – support is built in. The application is just a simple .EXE file that you can run from the CD, the hard disk or a USB stick, yet it provides a fully-featured graphic interface to Numimini. No command line hackery to be bothered with on my clocks – just fire it up the PC program, pick the options you want and hit OK. Check out the screen shot.

At this point, Mac and Linux users are probably feeling a little left out, and I apologise to you. I only have access to Windows, so can’t offer a native version of the Numimini host application for your computer. However there’s a strong probability that the Windows application will run just fine on a decent Windows emulator (though I have not tried it). As an alternative, the CD that comes with Numimini has example source code and documentation of the programming interface for the clock. It’s a complete interface specification, with almost 40 commands controlling every aspect of the clock’s operation. If you have the requisite programming skills, it will not take you more than an evening to get something up and running. In fact, if you want to write a full host application and would be prepared to let me distribute it freely as part of the Numimini package, I will actively collaborate with you on the project.

The documentation has turned out to be a major part of the whole project, just as for my earlier clock, Nixie7. The complete Numimini Owner’s Manual and Assembly Guide runs to over 50 A4 pages, around 24,000 words. Compare that with the single sheet of paper you get with some competing nixie clocks! It’s full of background information, discussions of the design, simple step by step guides for how to build the clock (did I mention that yet? Yes, Numimini is also available as a kit for those who like to build their own!), and all the detail you need for tweaking Numimini to get it just the way you want it. It’s also lavishly illustrated. The document is written in an easy to follow style, and broken up into sections so you can find your away around easily. The main chapters are: