It was going to be based on the CD47, which many had heard of, but few had seen. Most people knew from the stories from their ancient, wrinkled relatives that the CD47 had existed in the past, and once had been easy to buy. But that was back in the dark ages, where few cared for Nixie things, and even fewer understood the magic that made them glow. Now they were nowhere to be found.

But the conjuror was sure that he could rediscover the magic and rekindle the fire, lost for so many moons. It should have been a time for rejoicing and celebration! After all, there was going to be a new place that we could get tubes from. Dalibor Farny was making tubes, and they were a marvel! But Nixies are like shoes, or friends. You can never have too many... Who would not want a new, large unique Nixie tube?

But the people of that far away forum did not rejoice. Instead they sneered and sniped at that enthusiastic person. They said that the Magic had been lost long ago, and even the great Wizard Dalibor, in his Castle in Bohemia had spent many years laboring away at his forge to rediscover some of the secrets, and that it was impossible, nay, unthinkable that anyone else could rediscover this magic. They called him a charlatan. They called him a scammer. And the light faded from the man's eyes...

No one believed in the conjurer. He pulled his cloak tighter around himself, and brooded. But he refused to be beaten. He would perfect his magic, alone, and trust no one until he had captured the fire once more... 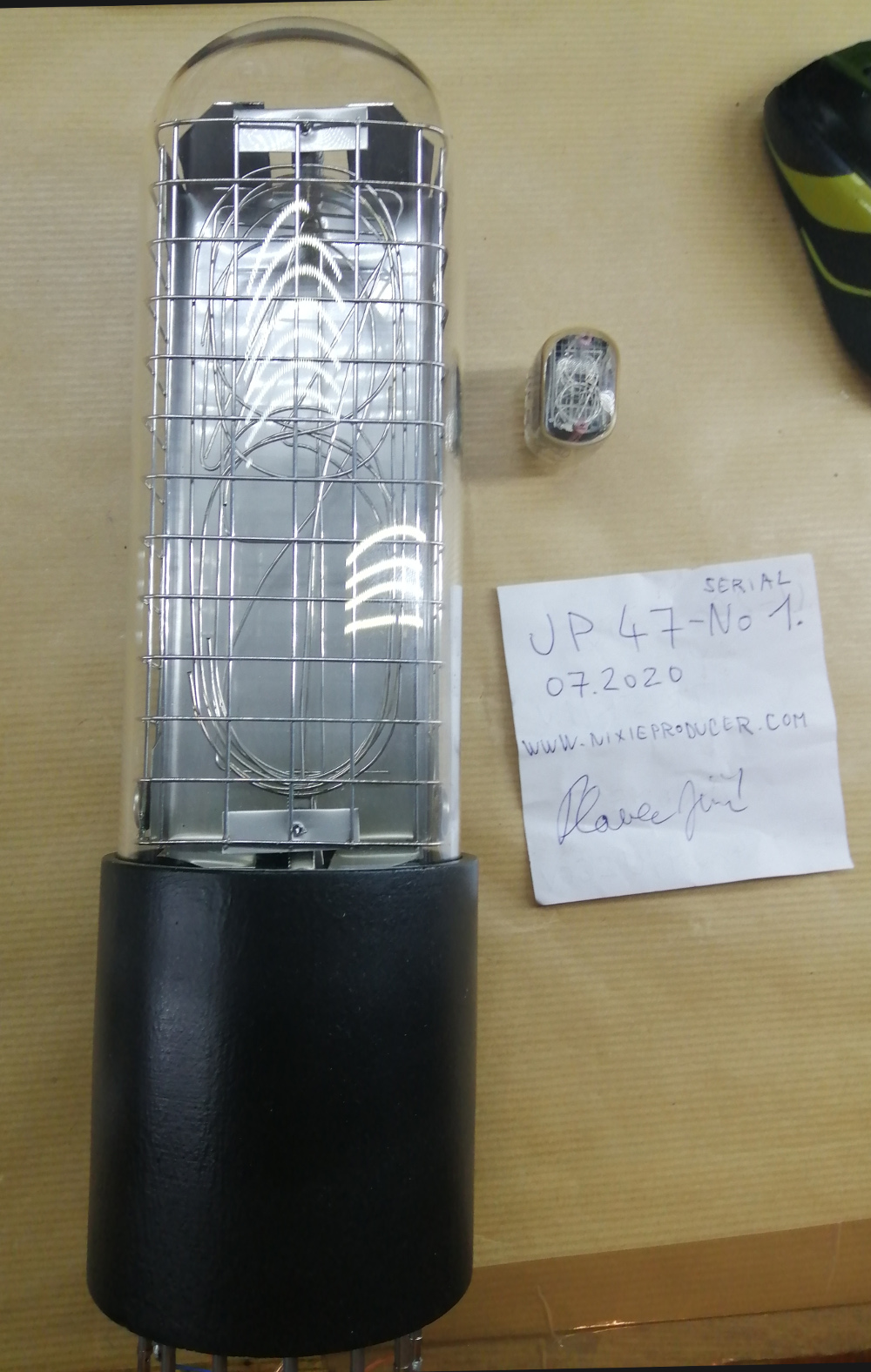 Forgive me the playfulness of "The story so far". It is a bit far fetched, but the core of the story is true.

Development of the JP47 did continue, as evenings and weekends allowed, and Jiri (the name of that conjuror) rediscovered the techniques to making a large format Nixie tube again. Once the development was nearing completion, I was offered the first tube to be produced, so that I could have a look at it and tell others about it.

During August the tube arrived and, to be perfectly frank, I was a bit shocked when I opened the package and saw what was in there. On the right you can see the JP47, with an IN-12 for reference.

The tube is enormous! The glass cover has a very elegant form to the dome on the top, and seems to be very well blown. The seal at the base of the tube is a little dirty, but the base is entirely enclosed in a black, resin cover, which is smooth and quite professionally finished.

The digits are formed out of stainless steel wire, spot welded, stacked 0, 9, 8, 7, 6, 5, 4, 3, 2 and 1 at the very back. The "1" has an unusual shape, with the "hook" quite large. The digit form seems quite elegant, but I can imagine that this will be a matter for some discussion later. I could imagine that purists will demand that the tube be as perfect a reproduction of the CD47 as possible, but others will be interested to see the variations that can be made.

In general, it is clear that this is a hand made device, even if the level of craftsmanship is high. The "tray" is not perfectly formed, and is possibly out of a material which is thicker than necessary. Also the cage is not quite perfect. We must however remember that this is a pre-production model, and entirely hand made, where later models would benefit from machine cut parts. Having said that, the level of workmanship is already very good.

The base pins are 1mm machined pins, and this tube came with matching pin receptacles.

The digits are around 106mm high, and the total depth of the digit cage is about 22mm. It is a bit hard to measure precisely. In comparison to the Rodan tube, the digits are a little smaller, but not so that you would notice it. Also of note is the large gauge "cage" in front of the digits. On the Rodan tube, this cage is diagonal, on the JP47 it is square to the tube height. Possibly this is for ease of manufacture.

Also of note is that the tube has 2 getters, one on each side, to maintain the vacuum for many years of service. 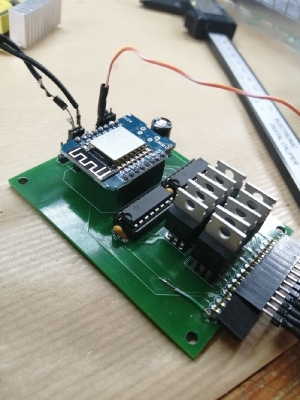 Electrically, the JP47 is a demanding tube to drive. It requires a drive voltage of 260-270V at 14mA. That's 3W! Many power supplies will not be able to handle this, and you are going to need a special supply, Luckily, such HV power supplies are available cheaply (around $9 US) from Ebay.

My first experiments failed to light the tube up reliably, and I had to design a high voltage, high current driver to allow the tube tests to be performed. I use an array of IRF840 MOSFETs, driven by 74HC595 shift registers. All this is then controlled by a Wemos running a rudimentary driver program.

The base taller than the Rodan tube, but again, I believe this is a pragmatic decision for the early status of the tube - remember, this is tube serial number 1, and there will no doubt be a lot of development that still happens.

The digits at low frequency are stable and bright. At higher frequencies, physics comes into play and the digits seem to shiver. The digit strikes and the ionisation travels along the digit. With such large digits, this process takes time, and therefore the tube is not suitable for "stunts" such as rapid fading between digits in the current form.

According to Jiri, the tube is not doped with mercury. While many believe that the mercury doping is necessary for a long life, tubes of this size do not need it. This means that the worm glow of neon alone shows up in this tube, without the harsh light that mercury doping causes. In fact, my early clocks were all based around the IN-1, because the particular colour of neon alone pleased me more.

This tube will have specialist fields of application. It is too large for most living spaces, and will easily dominate any normal sized room. For the average hobbyist, it will be too much. Enthusiasts will love it. Who needs a large tube? Probably no one. Who wants a large tube like this? I would posit that all enthusiasts will.

I do see a definite application for this tube in "statement" or "signature" applications, such as high end office spaces, assembly halls and hotel lobbies. The glow of the tubes is warm and alluring, and the fact that the tube is best used to show static digits at full brightness, means it will fit into situations where the tranquility of a fixed display of hours and minutes is required. It will naturally draw the gaze of onlookers, and will make a definite statement.

It is truly hard to put a value on this tube. Rodan tubes are only ever very rarely for sale, and when they are, can command extremely high prices. With the prices of Nixies generally climbing in the past few years, this trend is set to continue. The last time that I had a concrete possibility to purchase CD47s, they were offered at €1300 each, guaranteed working at the time of delivery, but with no subsequent guaratee. This was back in 2017, before the recent price hikes.

Production capacity is around 100 tubes per year.

If you would like to get in contact about the JP47, you can go to This email address is being protected from spambots. You need JavaScript enabled to view it.. The website is being upgraded currently and will be online again shortly.

I am very happy to have been involved in this project, even for the small part that I have played.

I believe the tube is something genuinely new and welcome the fact that someone is producing a new production tube that is fundamentally different from the tubes Dalibor Farny produces. I also believe that the JP47 is different enough from the RZ568M that it offers new options to tube enthusiasts without putting these new tubes into competition to each other.