Many people in the Nixie Clock Community have heard of Jeff Thomas. Some people even have one of his clocks. It was a Jeff Thomas clock which caused Brian Stuckey to start this site. Jeff was renowned for the quality of workmanship and the attention to detail, and the clocks were good, reliable and full of features.

A week or so ago, Bob, a member of the community approached me by email asking my opinion on a question which I couldn't really help him with at first. He had a spare GPSII clock and he wanted to sell it. Or perhaps he didn't. Or maybe he did after all... Clearly, this was not an easy decision to make. He had many questions, only some of which I could help with (ma answers in brackets):

In the end, Bob has decided to let the clock go after all. He takes up the story himself...

Caution: Please be careful with the high voltages present on this clock. It has a simple Plexiglas cover as the only protection from the potentially lethal voltages required to run nixie tubes. I figure folks here on the nixie site are going to be careful with these voltages where the general population on eBay may not treat the clock with the respect due. Cautions apply to only run the clock with the cover in place and to keep the clock away from children, pets and others who may put fingers where they don’t belong! 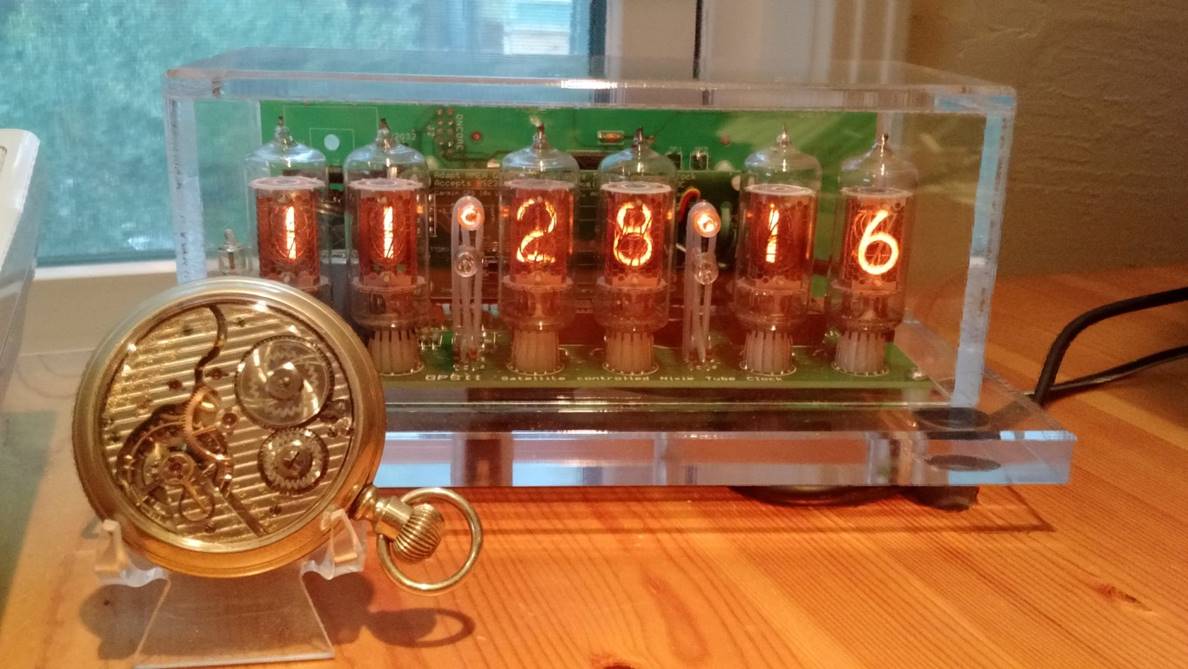 Moving on to the fun part, this is a very clean 2003 example of the Jeff Thomas / John Miktuk GPS-II Compact GPS Satellite Controlled Nixie Tube Clock.

The GPS-II is one of the nicest looking small GPS controlled clocks – at least to my eye. These Jeff Thomas / John Miktuk clocks are also relatively rare and are a part of Nixie clock history.

I’m the original owner of this clock and it was shipped direct to me by Jeff Thomas in 2003. It’s been well maintained and has lived in the same smoke free home since new. I run the Nixies at one of the lowest intensity settings and have the Nixies off much of the night. Note the lack of discoloration on the tubes… 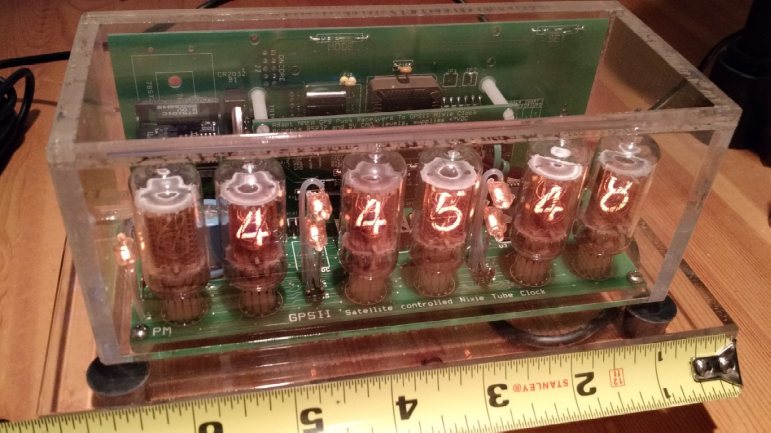 I upgraded the processor with the most recent 2010 firmware from John Miktuk a few years back and recently replaced the original Trimble Lassen SK-8 GPS receiver to work around a problem that developed with all Lassen receivers of this vintage – more details on the receiver below.
The clock and its numerous features are well described by Jeff Thomas at the following link:   http://www.nixie.dk/~jthomas/gpsii.html

For those not familiar with this clock, here’s a list of key features from the manual:

The manual is available here: http://www.nixie.dk/~jthomas/GPSII_Operation.pdf

My GPS-II as originally supplied by Jeff came with a Trimble Lassen SK-8 GPS receiver and all was fine and good until February 13, 2016. On that date, the Trimble Lassen firmware created a date decoding error and the clock began to display the year as 1996. Not good. Here is one manufacturer’s description of the problem and their provision of revised application firmware to address the issue.

The manufacturer above was able to modify their firmware to fix the problem. Unfortunately, the GPS-II clock firmware is not public domain and is not available for me to fix the bug. I took an alternate approach adapting the GPS-II hardware to use a Garmin GPS18x LVC 5m integrated receiver.

The core of my modification is a printed circuit interface board that I designed and built to be a mechanical match to the original Trimble Lassen receiver. I changed out the GPS receiver board in the clock for my adapter, changed a jumper on the GPS-II to tell it to process NMEA sentences as provided by the Garmin receiver and the clock was back to displaying the correct date… with a more modern and more sensitive GPS receiver. As an aside, my adapter will support many 5V integrated receivers at both CMOS and true RS-232 levels. There’s also a jumper supplying an optional logic level inversion.

I’ve included a couple of photos showing the new black Garmin GPS18x receiver, my custom interface card, the original Trimble SK-8 receiver, and the original white puck GPS antenna. (I’ll include the original receiver and antenna with the clock just in case you ever want to display the wrong date…)
A point of pride… Jeff built beautiful clocks with meticulous workmanship throughout. It was my intent to match the quality of Jeff’s work with my surface mount adapter card. I like to think that I succeeded. 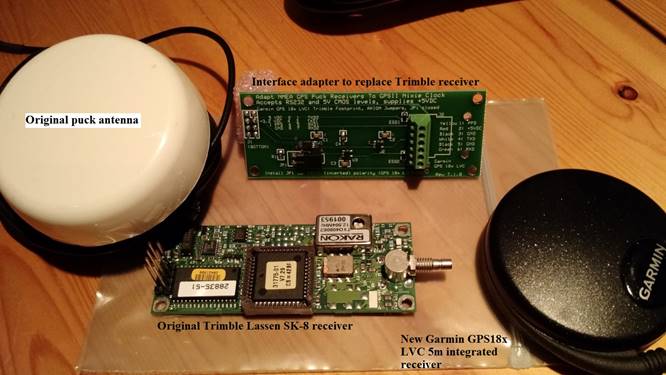 The new adapter card installed in the clock:

A conditional "Yes" for the Trimble adapter with an Oncore equipped GPSII.

Expect no problem electrically as the necessary signal lines for the Oncore and Trimble are in parallel. An issue may be getting the NixiSat to speak NMEA… not sure if NixiSat has a jumper for this, or if we are lucky and it already uses an Oncore programed for NMEA output. I jumpered my GPSII for an Axiom receiver that speaks NMEA.

Mechanical is also an issue. The Oncore uses a different socket and mounting holes on the GPSII. Would need to add the Trimble socket and clear Trimble mounting holes of solder. Some dexterity and soldering skills required to keep it clean.

Changes above allow you to mount a Trimble form factor adapter.

Plan "B" would require a new adapter PCBA in the Oncore form factor. No GPSII soldering required.

To complicate matters, I only built three total Trimble form factor PCBA so a new run of boards would be required for either form factor.

Building more pcba gets us into a wider discussion and likely moves to a new thread. I'll ask Ian where to continue.

This raises a question if the NixiSat supports NMEA as well... possibly by jumper selection? I just don't know!

Bob
#4 Robert Berwick 2017-01-12 22:18
I've got two of Jeff's GPS II clocks.
How does one go about obtaining/repli cating this
terrifically designed fix?
Thanks
Bob
Refresh comments list
RSS feed for comments to this post
JComments