Based on the Thiem-Work Scope Clock Kit 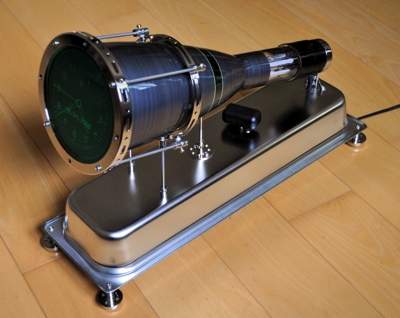 Until now, David Forbe's Scope Clock Kit version 2 was the nicest scope clock I've ever encountered.  This one, however, is my new favorite.  IT is based off of the Thiem-Work scope clock kit (99,00 €).  In terms of aesthetics, the exposed tube is a striking change from all other scope clocks that I've seen to date.  The inner workings are presumably hidden under the aluminum housing underneath the tube.  It is hard to get a scale since there aren't any other images avalable, but the CRT face is 13cm across.

There are some significant differences between this and the Forbe's Scope Clock.  This unit appears to have a raster image display rendered using a vector CRT.  If you look at the photos below, the images look a little pixelated which implies that the underlying hardware is generating a bitmapped version of the image and then rendering it on this display.  In contrast, the Frobe's Scope Clock renders everything as vecor images giving the numbers on the face a much smoother appearance.  The trade off is that the Forbes version is much more difficult to engineer but the image looks much crisper. 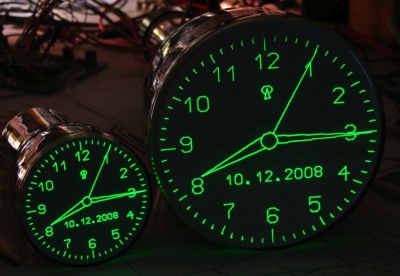 The other major difference is that the Forbe's Scope Clock uses a GPS for setting the time.  The kit that this was based off of uses an internal oscillator.  While it greatly reduces the cost and the complexity, it seems a shame not to include it on a clock of this caliber.

If Eric C ever decides to sell these commercially, I will be first in line to buy one!

If you know more about the creator, please contact me so I can give him credit.

This appears to be the same clock: