For the truly retro at heart - a mechanical Nixie

I came across this interesting video a while back, but didn't get around to writing anything about it at the time. It's from a chap called Mario Rigogliosi, who lives in the same town as I do, who has a real passion for restoring old equipment.

Have you ever asked yourself "what made Nixie clocks go before microcontrollers were invented"? If you did, I suppose you came to the conclusion that it was switches, levers, relays and stuff". Well, here's a look into that "stuff", and it's pretty interesting. What is written below is based on my best guesses, I'll reach out to Mario and get feedback from him.

First of all, the time source comes from the frequency of the mains supply voltage, which is a surprisingly good source of time: supply companies in all but the most dark and backward countries in the world actively manage the number of cycles delivered to the consumer very tightly, even regulated by law in some countries. For example, the supply in the UK can be seen here: http://www.dynamicdemand.co.uk/grid.htm, and on the dial you can see markers for the "Legal Limit" of deviation, over which the supplier is subject to sanctions. 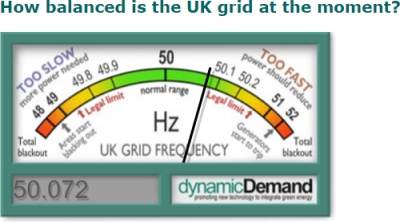 This is the momentary frequency, which varies all the time, according to load and generating factors. For example, when people wake up, demand increases, and to meet the extra demands, the suppliers crynk up their machinery to deliver more current, but this also has the effect of increasing the frequency momentarily. To compensate for this, the suppliers manage the frequency over the long term as well, often scheduling a small increase or decrease in frequency over the coming days, gauranteeing over a period of days that the frequency will hit exactly the target frequency.
The technology behind syncronous motors is well understood (Synchronous motor) and using these and a gearbox (also well understood) we manage to get the spinning slot wheel, which turns once per minute, and has 60 slots in it, giving the seconds count. Remember that in those days, dividers and counters were huge valve driven beasts cosuming tens of Watts, heavy and with poor reliability. We are before even transistors with this clock. A synchronous motor and a slot wheel was a rational solution to the problem of dividing time. 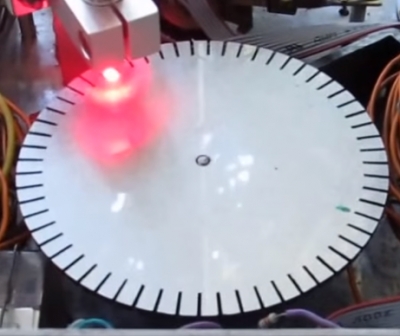 Note that the laser is not in keeping with the original mechanism, which also would have been mechanical, but in order to get the build done, some new components have been used.

Once we have a source of seconds impulses, we can use stepping switches, also known as "uniselectors" (Stepping switch) to count the seconds into minutes and hours and so on. Seconds, minutes and hours are totally regular, as long as we don't try to do acrobatics, such as are involved in managing the number of days in the month. Originally, these switches found use in telephone exchanges, where the pulses from the dial on the phone directly moved on the switches in the exchange. These too, were well understood, reliable technology.
The only thing I am not able to fully figure out is how the "tens of seconds" counter advances (or resets, I'm not sure) from "5" to "0". There are a series of rapid clicks, which seem to advance the wiper rapidly, I suppose these are wired so that the wiper automatically advances through the numbers "6", "7", "8" and "9". I would therefore expect 4 rapid clicks, but I hear 6 or perhaps 8. Are there two clicks per advancement?
Originally the clock only counted hours and minutes, but Mario added counters and tubes for seconds, just because he could.

Mario made two videos: A first one shows work in progress:
The second video shows the clock in its final form. You can see that there has been a bit of time between the two videos. Many things have changed, but the works are still the same.
After seeing the videos, I find myself wanting to build one like this as well. The original components were made to a quality that is hard to find nowadays, using materials that are costly and with the knowledge of the engineers of the day about reliability and durability. Much of this knowledge has been forgotten. There must be entire junk yards filled with original synchronous motors and uniselectors out there, if only I knew where they were...