Here is a great clock from Michael B. This is the RackMountable Nixie clock. The enclosure was purchased off of eBay, polished up, and brought back to life with the electronics from a NixiChron. Take a look: 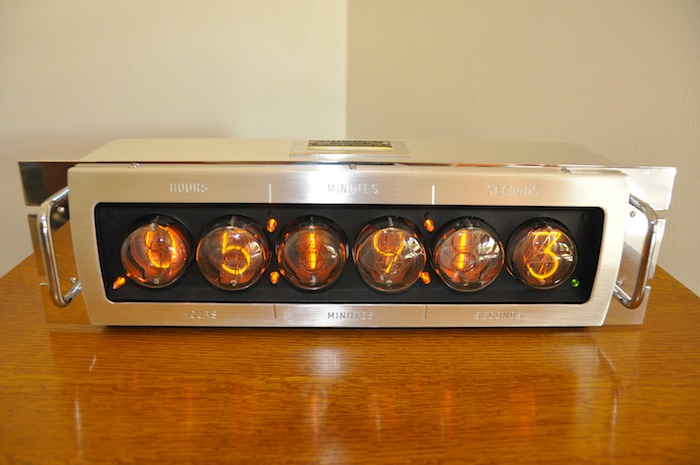 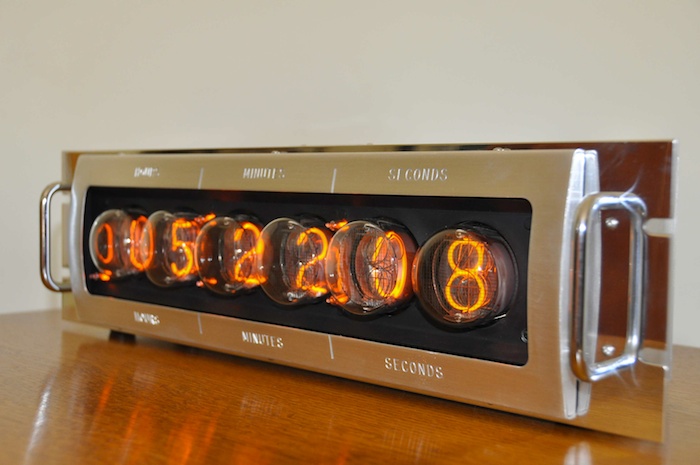 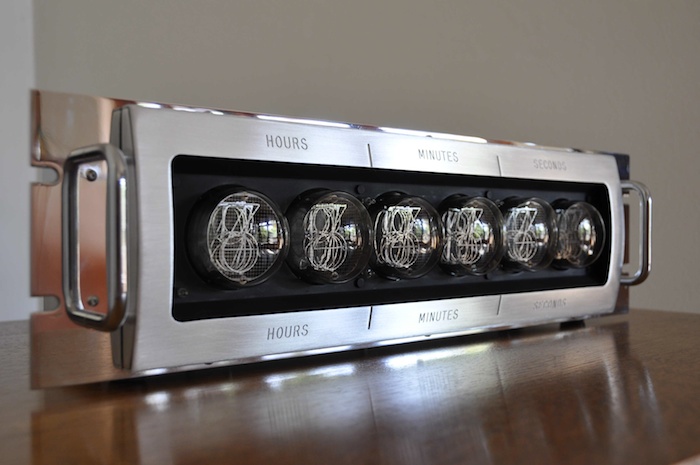 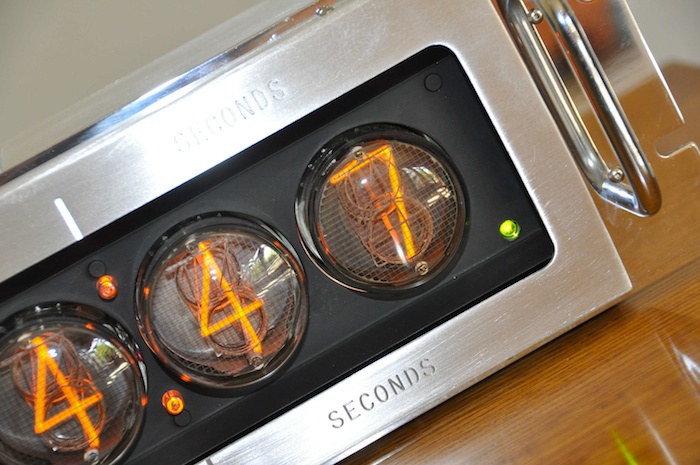 It’s been a while since I’ve done a review so let’s jump right in. This, is the IN-18 Blue Dream from Nocrotec.com and NixieKitWorld.com.  This device is only sold as a kit so keep that in mind when ordering the device.

This device uses 6x IN-18 tubes to show the time. I particularly like IN-18’s because they are large and they are still relatively easy to find on eBay. They also seem to have a relatively good life as well; I have a set on IN-18s that have been on continuously for almost 5 years and show no signs of dimming.

Below the tubes are 2x SMD blue LEDs per tube. If you are looking at the clock face on, the LEDs are on the left and right sides of each tube.

Between the HH MM and SS are two sets of neon tube colon indicators. They are stacked vertically in small glass envelopes. The entire enclosure looks like a miniature test tube and is about the width of a felt tip pen. Since these are neon tubes as well, they emit the same color light that the nixie tubes do so they are a near perfect match. Some clocks use orange LEDs which are an okay substitute but the neon tubes on this device look very nice.

The first thing that jumped out at me when I first turned on this clock was how vibrant the blue LEDs are. They actually pulse with the time and throw off a significant amount of light when they are set to their brightest. There are 10 brightness levels that are user adjustable.

The colon indicators have a similar setting to the LED under lighting. They can be set to:

The IN-18s also have a set of transition effects as well. The digits can be set to simply switch between values, to fade smoothly, or to do a modified roulette effect. The roulette effect is interesting because normally you would expect it to count sequentially 1.2.3.4..etc. Instead, it illuminates the digits based in the order that they are stacked. This effect emphasizes the depth of a nixie tube and adds a feeling of randomness to the effect. I particularly like this effect and it is the default one that I use.

This device has a built in real-time clock. It can be set through the menu and the drift can be adjusted as well to ensure long-term accuracy of the device. However, this device supports several other options.

DCF – if you live in Germany, you can purchase a DCF receiver. The receiver is a little black box that plugs in to the back of the device and sets the time automatically.

GPS – You can buy a commercial GPS receiver and connect it to the back of the device. This option is great because it works worldwide and all you need to do is adjust the UTC offset in the menu.

The power supply uses an efficient push-pull method that is absolutely silent. Some switch mode power supplies generate a high frequency hiss but that is eliminated in this design.

The display is directly driven and this has a few advantages over multiplexed displays. Each tube is run at it’s rated current (6 mA) to ensure full brightness and a long tube life. This also means that no “blue spots” appear in the tube.

Of course this is a kit and it’s up to you to do a good job assembling it ☺ However, the finished product looks very professional. The stainless steel base and bottom give a nice weight to the clock. For comparison, my NixiChron is slightly larger but this device weighs more.

On the rear of the device, there are three buttons, a power connector, and a connector for the DCF

The tubes are not soldered to the board. They are socketed which makes replacing the tubes easier and also ensures that you can straighten any crooked tubes.

There are no surface mount parts for you to assemble. All of the SMD work has been done leaving you with only through hole components.

There are few clocks that I keep on my desk and this is one of them. I really like this clock and the feature that I like the best is the modified roulette transition. The IN-18 Blue Dream is a solid design. 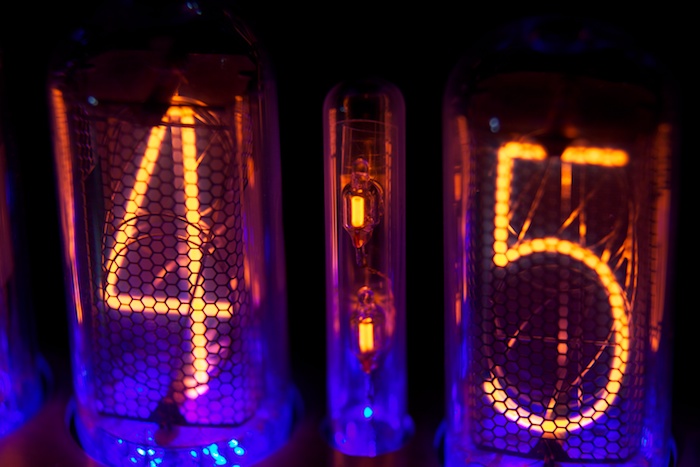 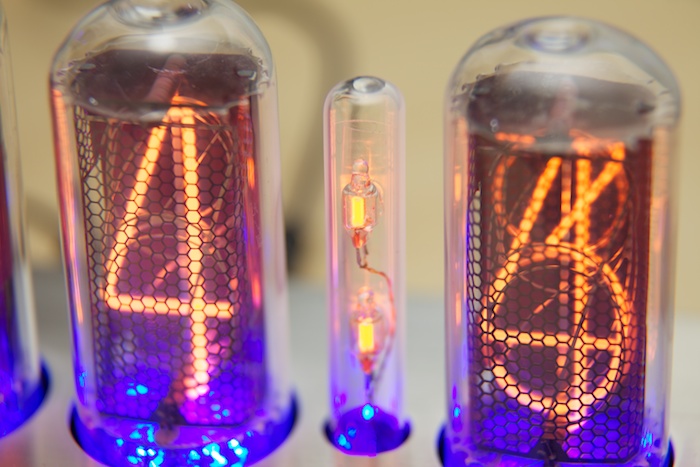 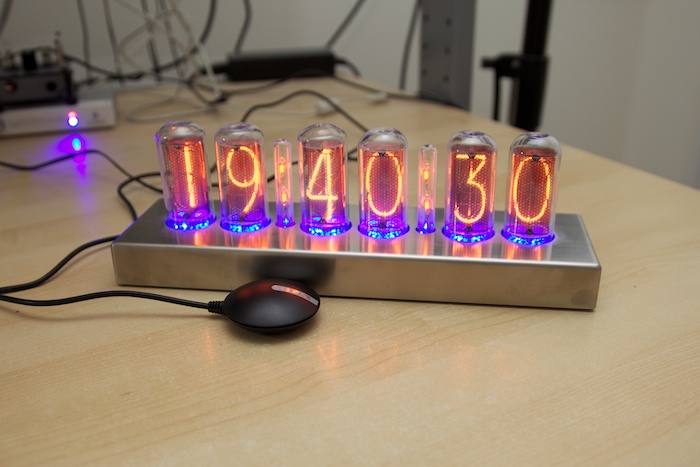 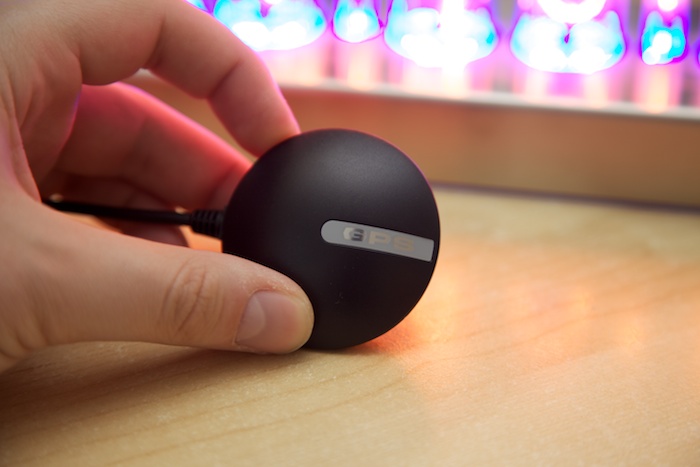 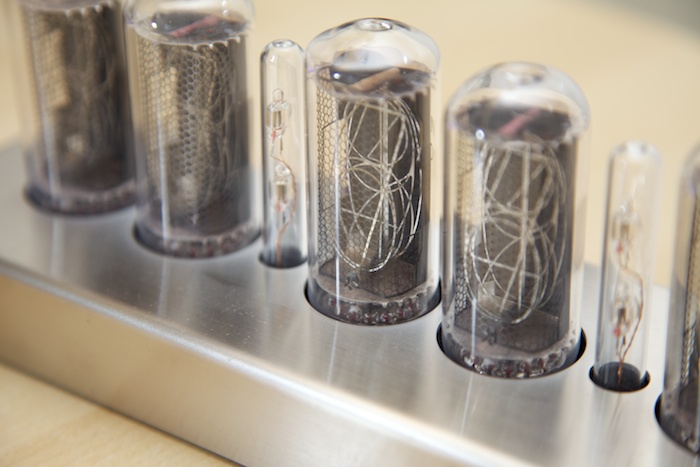 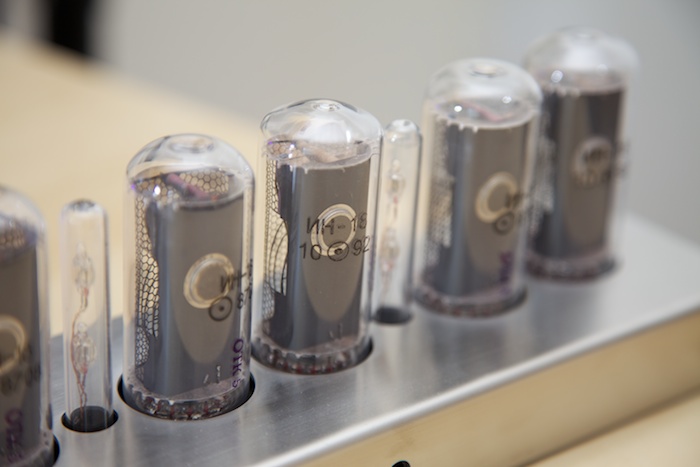 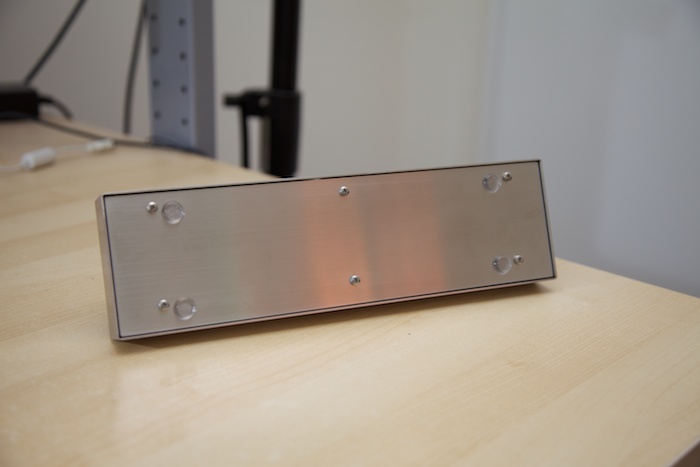 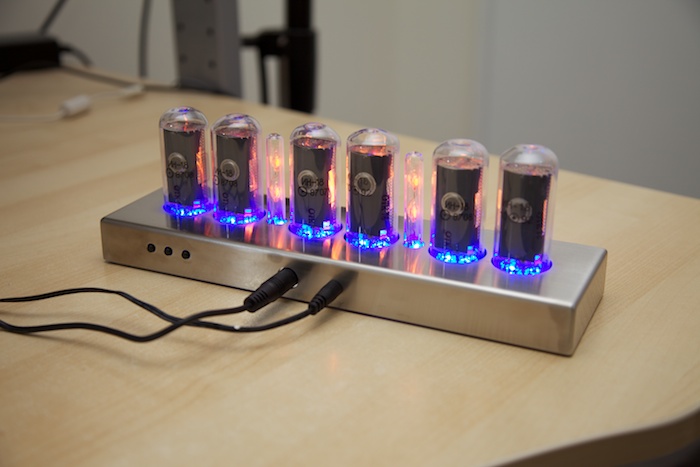 I just found this awesome little clock from Kosbo.com. It is actually a PCB that mates with a vintage panaplex style pinball display. There is one for sale on eBay and one for sale on Kosbo.com. Based on the website description, it looks like it uses similar software to his other clocks (based on the display mode / setup mode control scheme.). Check out the links below for more information. 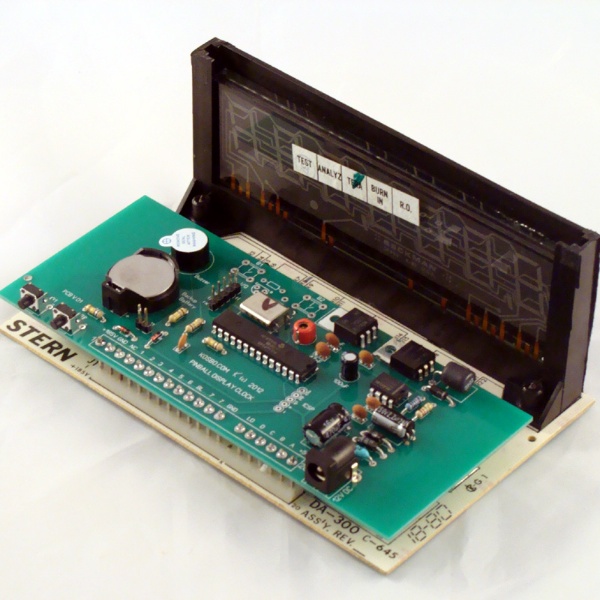 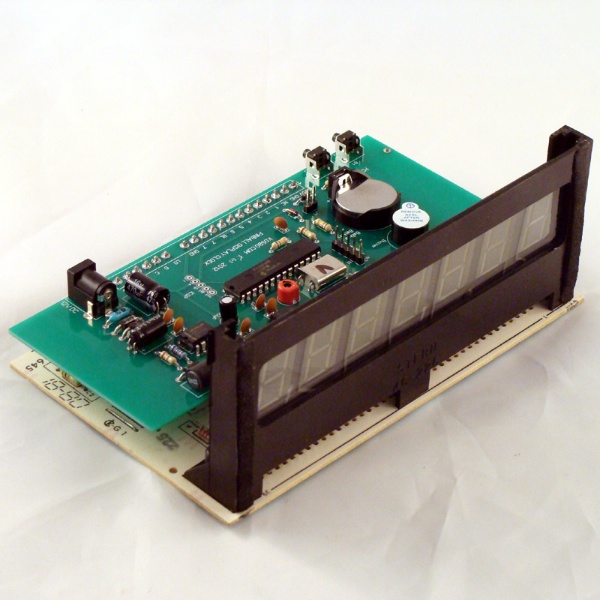 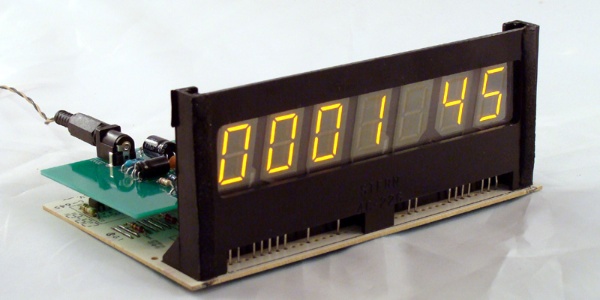 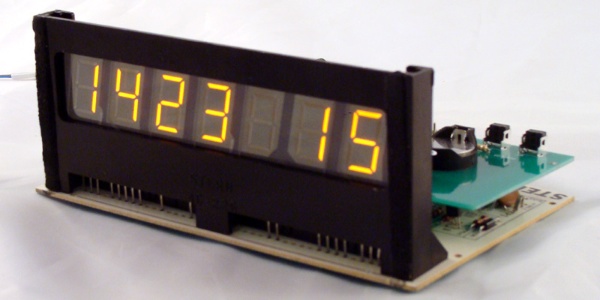 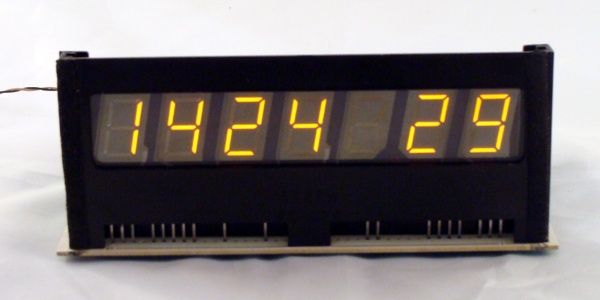 Here is a video of the new wireless GPS link in action: