Some hardware modifications to my Wemos clock

First, I replaced the LM7805 with a cheap switching regulator. I found these on eBay - there are newer versions, just search on “replace LM7805”. I mainly did this mod because I have a small pile of 12v switching wall wart power supplies, and wanted to use them. The LM7805 was gettin hot with this high an input voltage. I had the switching regulator to replace the LM7805 from a prior project. They only less than US$2.

Second, implemented the change to J1 and J2 which Ian and I discussed in another thread. This change prevents the display board from being plugged in backwards.

Lastly, I reversed NE1 and R10 (put NE1 in R10s position and vice-versa) and did the same swap with NE2 and R12. I did this because the IN2 Nixie’s are so small, and I wanted the colon formed by the Neon bulbs to be closer. I also put some shrink tubing over the light dependent resistor between the neon tubes. This tubing blocks and light from either the neon bulbs or the adjacent Nixie’s from leaking into the LDR. The shrink tube is just slightly shorter than the grids in the Nixies.

I will probably put a little hot glue or shrink tube over the R10 and R12 resistors. By swapping them with their series neon bulbs, they are closer to the board edge and have 170v on them. 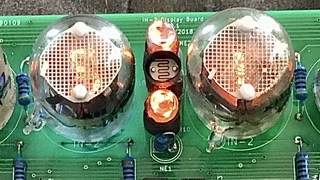 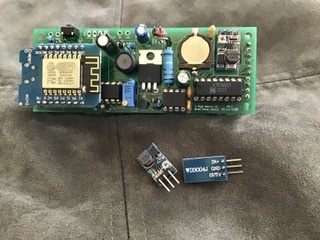 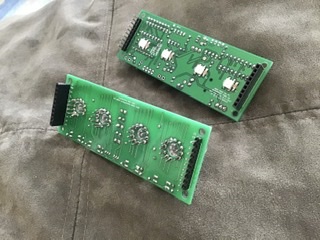 Less More
1 year 11 months ago #11769 by Ty_Eeberfest
Replied by Ty_Eeberfest on topic Some hardware modifications to my Wemos clock
I like all your mods. They make sense and look good.

I'm very fond of those switching 7805-style regulators. I've been using the Murata ones ($10 each from Mouser - ouch) on personal projects.Since you are getting good results from the eBay $2 ones I think I'll try them next time I need a +5V reg.
Look into it later when the dust is clearing off the crater.