Less More
10 months 2 weeks ago #10565 by Phil_Mod3
Feedback 4 Digit Wemos Clock w. IN-12 Tubes was created by Phil_Mod3
This is just a short feedback on the 4 digit Wemos clock. I was fortunate to obtain main- and tube-pcbs from Ian some months ago. At that time, a detailed BOM for the components used in the circuit was not available. It took me some weeks to "reverse engineer" this information, which of course was not perfect.

Altogether, I like the clock very much, especially the small form factor and functions are great. In my opinion, it is especially a leap forward in firmware features compared to those offered by the Atmega based clocks. There are definitely features which I'd like to see back-ported to the Atmega FW. For example, it is possible to adjust the brightness of the separator and backlight independently, relative to the overall brightness.

Also, it is great to see that the HV generation is absolutely quiet and extremly stable (especially when compared to the Atmega based clocks). Once set to the desired value via the trim potentiometer, it is as stable as seen in the oscilloscope image below, at least for all situations that I encountered. 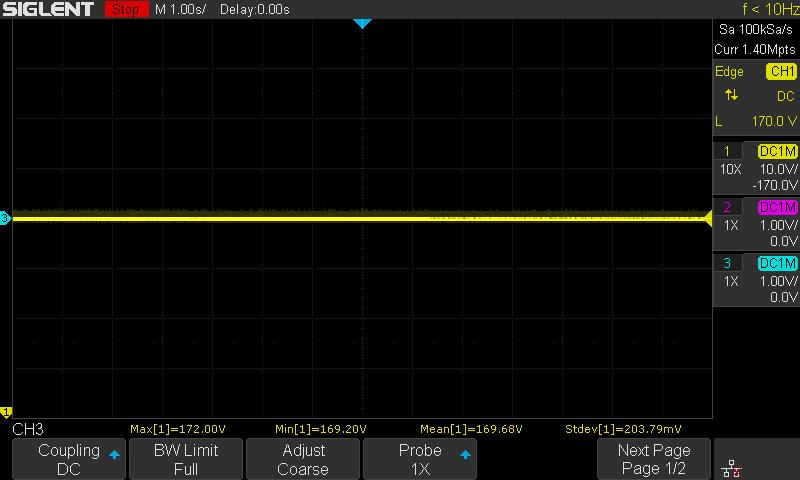 -Although relying on the same NTP server as my other clock, the Wemos based one is regularly out of sync with the "correct" time, even up to some seconds in rare occasions. I still have to find out where this comes from. I'd wish that it is correct to within maybe 100-200 ms.

-Also, the blink of the separator is not in sync with the seconds turning. I know that this could be obtained relatively easy and would recommend to implement this in future software revisions.

-Anti cathode poisoning is not available on the clock. I'm wondering if this will have any negative long term effects?

-The digits of the IN-12 board are placed so that there is very little margin around the digits (they are really close to each other). Also, the separation between the 1h and 10m digits is very little, which makes placement of INS-1 neon separators in between the IN-12 tubes almost impossible. I know that the current dimensions keep the clock compact, but would have preferred one or two additional centimeters in horizontal direction in order to be able to place separators more easily.

-The placement of the backlight LEDs has as a consequence that the IN-12 PCB is illuminated by the backlight LEDs and therefore could be seen also inside a case. Also the placement decreases brightness of the backlight, since the distance between LED and tubes is comparably high. This, and the point that the LEDs have to shine through a rectangular hole lead to relatively low brightness, which, for my taste, is too low under daylight conditions. I understand the the LEDs work as diagnostic lights and it makes some sense to have these on the main pcb, but would have preferred LEDs being on the tube pcb.

I'm looking forward on discussing some of the criticism provided above.

As said, I'm really happy with the clock and I'm looking forward to the IN-18 clock that hopefully comes out soon, since I have the tubes already sitting here.

Time drift: For better or worse, the time between NTP updates (by default every 3 hours or so) comes from the ESP internal clock, although there is a 1307 on board. Really the intermediate time should come from the 1307. This is a software change. I can do it.

LEDs out of sync: It's true. It's been on the list for ages to resolve this issue. It is something that doesn't itch my OCD, but I understand for others it's unpleasant. I'll solve it.

ACP: I took it out because the code was forked from a VFD clock which I never released. To be honest, I stopped worrying about this because the clock has a PIR input, and the tubes are almost never on. My clock in my bedroom has been on for 135 days, and the tubes for only 6 days. (The stats are on the summary page). I can re-add it if it seems like a good idea.

Tube spacing: I swear it's the tubes, not the board! They have such large tolerances on the glass parts, if you move them around, you will probably find a combination that fits. I have moved the tubes 0.5mm apart on the newer boards, but it's not really enough. It's on the list together with the better connectors. If I can find a better connector, I'll move the tubes around. I was aiming for the smallest form-factor I could get.

Backlight holes: The newer display boards have larger holes and this helps quite a lot. I'm search for a better connector technology with a lower spacing, but have yet to find a good one. I can put the LEDs on the display board without putting the tubes in sockets, and that just seems like extra work for no lower profile. Sorry, can't do much about that one, except better inter-board connectors.
The following user(s) said Thank You: Phil_Mod3

thank you for the comprehensive answers.

-time drift: good to know that it could be improved, I had the suspicion that the wifi interrupts of the esp are responsible for that?! Well, I think accuracy is OK as it is now, but on the other hand, from a modern, ntp-based clock, I'd expect an accuracy <1 second as baseline. BTW: what is the DS1307 doing when NTP is used? backup?

-separator sync: It doesnt stress me too much as well, although I'd prefer it to be synced. Maybe see it from the other side: somebody that doesnt care if it is synced will not mind IF it is synced.

-ACP: No idea if it is required. Personally, I am lacking experience since I'm in the "Nixie business" for a too short time. If you or somebody else with experience tells me that it is ok, then it is OK for me.

-Tube spacing: Thanks for the information, I'll try movingthe tubes around.

-Backlight holes: Good to hear that you are working on the topic. Would it help if the LEDs are mounted on the backside of the display board? Similar to what you did with the modular clock?

You mentioned having it in the bed-room. What is the best way to make the tubes as dimmed as possible (I dont mean switching them off)? I prefer to have it dark while sleeping, currently its set to the minimum dim setting but still a bit too bright for my taste. I tried lowering the voltage, but got problems with partially unlit digits at 165 v and a dim setting of 250.

Thanks for keeping up the work on the clocks!

I just made the changes for the following items:

Changing the voltage is not really effective usually to get the dimming down, as you have noticed this makes the digits light unevenly.

I'll be releasing this as V4 after I have given it a good test.
The following user(s) said Thank You: Phil_Mod3

Less More
9 months 2 weeks ago #10724 by Lötauge
Replied by Lötauge on topic Feedback 4 Digit Wemos Clock w. IN-12 Tubes
Hi,
I also want to give my feedback to the 4 digit clock.
The huge distance of the neopixel to the Nixie also bothered me a bit.
I have folded white paper into light channels and isolated with black tube lightproof. The light of the neopixels now only shines into the nixie and no longer alongside. 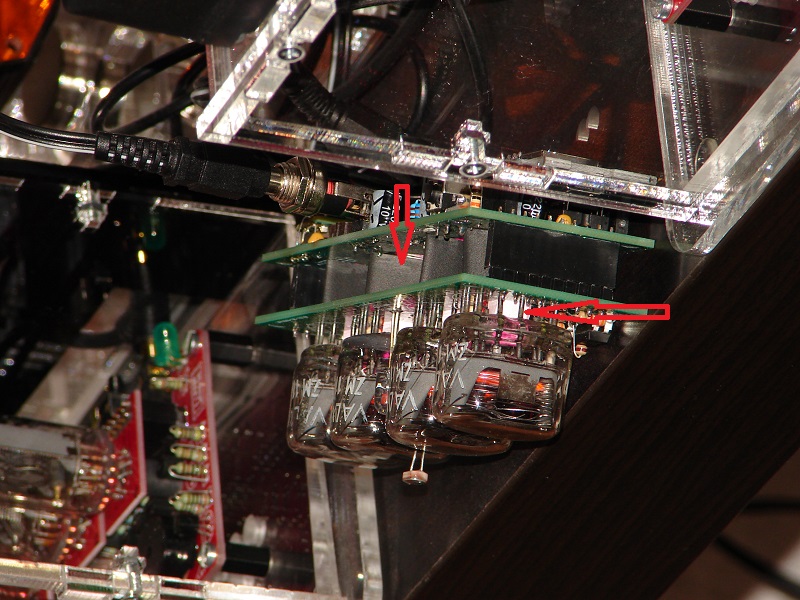 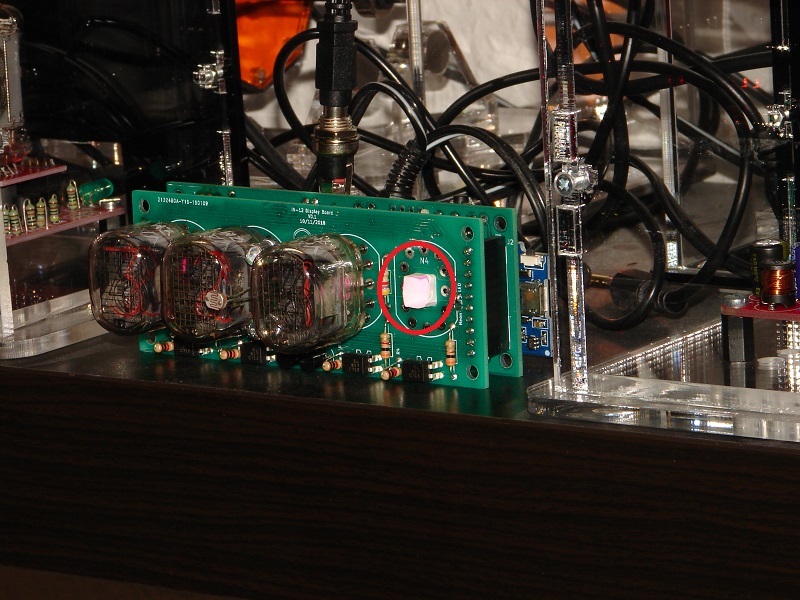 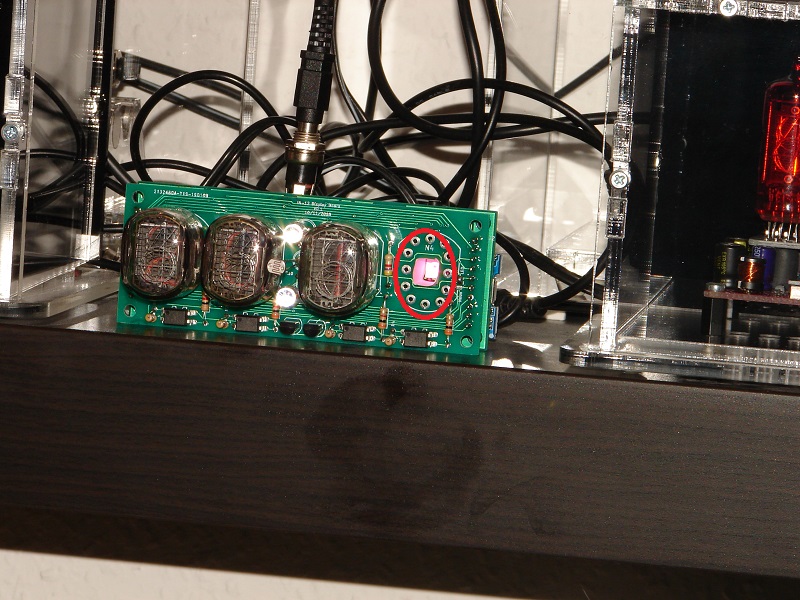 It would also be possible to use a white straw or a Plexiglas light guide which is inserted into the square openings and thus directs the light, encased in a black tube.

Since I run the 4 digit clock with 12 volts, I have the 7805, which is very hot, removed and exchanged for a Murata DC / DC Converter. It is not cheap but works very safe without getting warm.

After a restart, the controller likes to forget about individual settings, especially the settings of the Neopixels. Or the connection data to the Wifi.
The fact that you rarely makes a restart and the data can be entered quickly, I do not see that as a huge problem.

The update to version 4 via OTA went fast in seconds.

I like the part very well, good job Ian.

Less More
9 months 1 week ago #10735 by Phil_Mod3
Replied by Phil_Mod3 on topic Feedback 4 Digit Wemos Clock w. IN-12 Tubes
Ian: Thank you for the changes in the firmware! I'll try it within the next weeks.

Torsten: Great idea about the light-guide and the DC-DC converter.

I designed new pcbs for the clock with neo-pixels on the display board, but still have to test them.