Less More
7 months 4 weeks ago #12792 by Ty_Eeberfest
Replied by Ty_Eeberfest on topic Digit Brightness, Classic Rev6, IN-8 Tubes
Ian,
This is semi-OT but I'm pretty sure you'll see it if I leave it here...

When I click the link for the Classic Rev.6 User Manual
www.nixieclock.biz/Downloads/NixieClockUserManualV352.pdf
what I actually get is a user manual for a Modular with firmware 352. I understand that Modular and Classic Rev.6 use the same firmware but the title of the manual is going to confuse people.

More importantly, the Mode numbers in pages 9-12 are not matching up with reality, at least on my Modular v357 clocks. They are all offset by 7, e.g. HV Target Up is 23 in the manual but 30 in the code (and in reality). This is going to drive people who configure using the button crazy.
Look into it later when the dust is clearing off the crater.

"After all of this" indeed. This thread has gone all over the place and I'm not sure we've really solved anything. Interesting journey though.

Here are my thoughts / opinions on the items in your last post.

1. Not much I can say about this one except I wish this side by side comparison had been done much earlier. "Bright light" is such a subjective thing. One of my modulars sits on a shelf across the room from a large window that gets fairly direct sun in the mornings. I'd call that bright, and I can read the clock okay, but maybe your "bright" and mine differ. I will say that if I shine a small LED flashlight (Nitecore pocket size, pretty bright) directly at the clock it washes out to where I can't read it.

2. Hmm. I don't recommend doing that but they're your tubes. Max HV is limited in software to 200V. You could probably go a bit higher by editing the code but at some point you risk exploding C1 (unless it's a 450V cap which some kits did ship with), Also you will reach a limit where the circuit is driven to a point where voltage no longer increases but temperature does. Ian can probably tell you more - it's his design, his reasoning, he's the one that did all the math.

3. For what it's worth, the Mode A and B stuff in that data sheet appears to be translated from the original Russian - it's not an addition that some hobbyist made up. I don't speak Russian but if you look on Page 3 that sure looks like the Mode A and B stuff right above the base diagram. So i would say those recommendations came from the manufacturer. I'm pretty sure the voltages refer to supply voltage.

Tolerant of high current? Yes, it won't kill them immediately but it accelerates sputtering of material off the cathodes. Healing mode makes use of that effect to "clean" seldom-lit cathodes that have been "poisoned" by material that was sputtered off of frequently-lit cathodes. If you run high current all the time the increased sputtering accelerates aging. Bottom line, the manufacturers were not stupid, the specs are written the way they are for reasons. If it was a good idea to crank up the current the specs would say so, because then they could claim their tubes were "super bright". IMHO.

4. Not sure what to make of that IN-18 clock on the Arduino Project Hub. The narrative talks about various anode tricks but the schematic doesn't show any such thing. The anodes are hooked to the HV rail through 1K resistors, nothing special. The sample code doesn't do any pulsing of the cathodes so I'm not sure where you got 10% duty cycle from. Granted the sample code is not the real clock code. But all I see there is a fairly commonplace direct drive design with 1K anode resistors. As shown it'll bake the tubes to a crisp. Something's not adding up here.

I will say this: my IN-18 direct drive design for my personal use has HV5530s instead of HV5122s, which is not significant because their output structure is identical. I use 3.9K resistors on my anodes with HV set at 160V (hardware regulated) for an anode current of about 6.7mA. Datasheet max for IN-18 on straight DC (no MUX or other pulsing) is 8mA. The tubes are plenty bright. I have no blue-dot or poisoning issues. The clock has been operating for 10 years and I've has 1 tube failure. That was caused by outgassing, which is bad luck not bad design - just a leaky seal, it happens. I think the Project Hub guys may have been overthinking things a bit.
Look into it later when the dust is clearing off the crater.

I bring up the IN-18 subject because I think it demonstrates something about Nixies that may largely be overlooked and that may affect our (or my) thoughts on achieving full brightness with our 16% multiplexed/PWM situation.

I agree with your statement "As shown it'll bake the tubes to a crisp. Something's not adding up here." I thought the same, yet here I am some many months later with an IN-18 clock whose digits that look incredible - bright and clear with no sign of any cathode poisoning.

So I took a volt meter reading across the 1k anode resistor just to find that on average, the digits are running at 5 volts and thus 5 ma. Not what I expected given the 1k anode resistor and a direct drive. The only explanation is that there is some form of a PWM going on which is reducing average current.

In the Arduino Project Hub write up, which is not perfectly clear, the author does hint at this by stating:

"Therefore we decided to implement brief increase of tubes current using the PWM principle.
At the same time the brightness of the tubes using this scheme did not affect the brightness!
So at the end the lifespan of the tubes finally increased SIGNIFICANTLY in comparison to the manufacturers statements!!!"

In the actual code, the "doIndication()" routine is invoked over and over (every ? number of milliseconds) by the use of a timer, which causes a pulsed situation to occur. The off time, as far as I can tell, occurs within the doIndication() routine as the shift registers are being loaded.

At some point soon, I'm going to put a scope across one of the anode resistors in order to see exactly what is going on, but I expect to see a peak that is quite a bit higher than the 5 volt average measured with my volt meter.

So the whole point is that just maybe it makes some sense to increase the voltage in the IN-8 Classic Rev6 in order to achieve an average current of 2.0-2.5 ma and therefore a brightness comparable to a direct drive...

Less More
7 months 4 weeks ago #12795 by Ty_Eeberfest
Replied by Ty_Eeberfest on topic Digit Brightness, Classic Rev6, IN-8 Tubes
Yes, a scope trace across the 1K anode resistor is needed in order to understand what is going on. Obviously there is no way for the code to manipulate anode voltage or current directly so all I can figure is that they are doing something funky with the cathodes. Perhaps calling that doIndication() function many times per second so as to turn the cathodes on and off rapidly to create a sort of PWM. Hmm, I don't know... as you say, the write-up is unclear (I'd go so far as to call it crap) so without a scope trace I have no idea what to make of their alleged magical breakthrough, Can you tell I'm skeptical?!

Note that without any magic tricks the IN-18 is a brighter tube than the IN-8. I can't really quantify "brighter" though.

Vast generalization ahead!! The Nixie community usually does not ignore data sheets and overdrive the tubes. Therefore lifespan is not a big issue and the only magic trick needed is the well established anti-cathode poisoning digit scrolling technique.

As for attaining a 2.5mA current on your IN-8s, they're your tubes so what I think doesn't really matter. I drive mine in accordance with data sheets and can't say that I have ever thought they were too dim. YMMV. With the possible exception of that Project Hub write-up the literature seems to agree that increasing current decreases lifespan, which makes sense to me.
Look into it later when the dust is clearing off the crater.

The IN-18 is prone to cathode poisening so it requires a correct treatment with an antipoisening algorithm. Baking the tube to ashes instead of implementing an antipoisening scheme surely is not the way to go. If we believe the statement about the cubic current ./. lifetime relationship baking the tube with 10x the specified current would reduce the lifetime by a factor of 1000. This would match with the amazing insight of the author that the resulting lifetime is quite short.

Modulating with a 10% duty cycle would then lead to a lifetime reduction of "only" a factor of 100.

As mentioned earlier I own one of Dieter Wächter's "Blue Dream" clocks. The major flaw is the design fauxpas regarding the colon tubes, but it treats the IN-18 very well. I think I own the clock since around ten years and at the IN-18 I don't see any ageing so far.

Before I owned a kit from Claus Urbach which nearly killed my tubes because it didn't have any precautions regarding the poisening. And - surpise, surprise - after about half a year of use I had severe problems and had quite a lot of luck that I could salvage the tubes.

AFAIK the blue dot problem comes from the use of unsuitable drivers like the 74141 or the Russian counterpart. I darkly remember that Dieter had written something about that. These drivers have a breakdown voltage of only 60V, so they can't let float the cathodes. As the sustaining voltage is about 130V the glow discharge will stop as long as the anode voltage is below 190V but you will get side effects because undriven electrodes cannot float to potentials higher than the breakdown voltage of the driver.

When salvaging and testing my valuable IN-18s I only connected a single cathode (so the other cathodes were floating) and I never ever observed blue spots...

P. S. I have some trays of severely poisened ZM1350 panaplex tubes which wouldn't fire below 250..350V. With the normal resistors at this high voltages the glow discharge - once started - will melt down the conductive glass coating which is used as anode. The poisening does not seem to come from wrong use, instead these tubes don't seem to have a getter. When I have time again I will have to check if they gassed out or if they can be recovered with some healing scheme that doesn't produce too much heat...
Last edit: 7 months 4 weeks ago by Torsten Lang.

Regarding ACP, there is a ACP routine which doubles as the transition between time and date displays. It happens every minute. It is pretty quick - about 2 seconds total time to transition into and out of the date display. Just whips through all digits on all tubes. I just swapped the tens of hours tube with the seconds tube so that I can see all of those digits which are not routinely used. At this juncture, there is no sign of cathode poisoning. 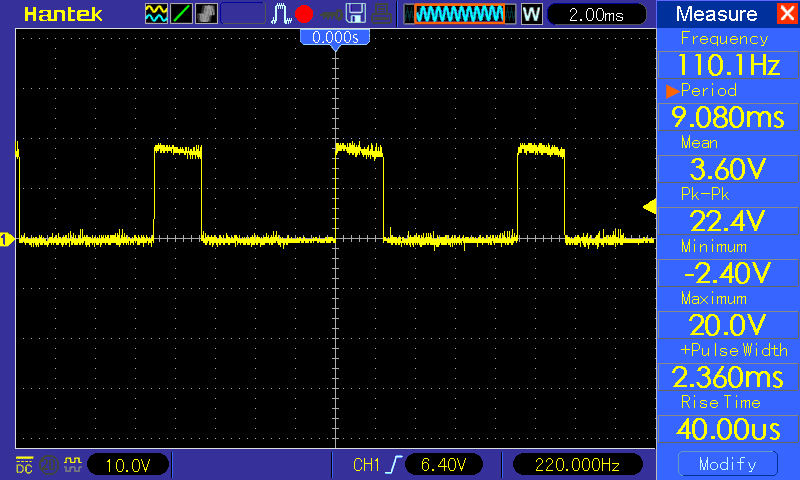