Now I just need a case.

Close to finished with a Nixie B5991 clock based on Ian's ClassicV6 controller. I created a PCB for the tubes, which attaches like a "hat/shield".

It include's Ian's light sensor for dimming control, and a RCWL-0516 RADAR unit for blanking when no one's around. I like the "2's" and "5's" much better on the real Nixies than on the IN-12 clones.

The separators use 2MLs for colons, and right now there are INS-1s there which pulse (they light more evenly than the picture shows). I'm not sure about those, I'll probably take them out.

It attaches using Samtec PC / 104 connectors which simply connect to the normal headers provided with the controller. There's plenty of clearance: 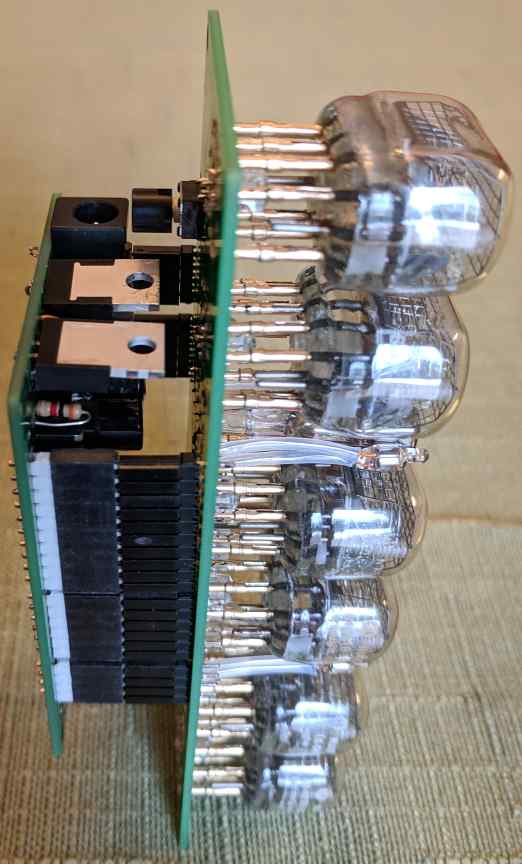 Less More
1 year 4 weeks ago - 1 year 4 weeks ago #9611 by Ian
Replied by Ian on topic Now I just need a case.
Nice! Glad to see it worked out in the end. The manual needed a lot of love, and it hadn't got it, being the youngest child in the Classic series. Sorry about the trouble.

Would you be upset if I shamelessly copy your display board? At least in terms of concept as perhaps opposed to the exact board design.

What are the pins you are using for the Nixie sockets? I'm still looking for a good, cheap source of pins for large quantities.
Last edit: 1 year 4 weeks ago by Ian.

I already downloaded the layout for your "shield". Will most likely also build an IN-12 clock based on Ian's kit and your shield.
What are your plans for the case? I thought about doing something similar as the "Nixie Dream" attached herein. 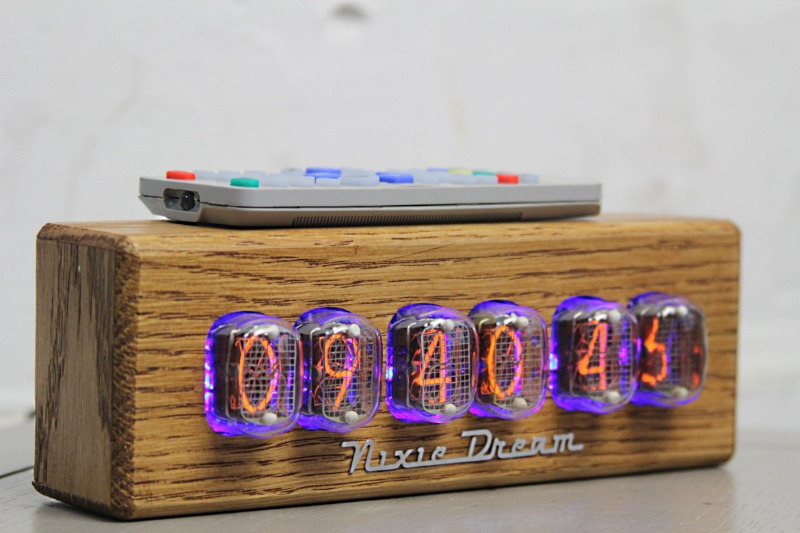 Less More
1 year 3 weeks ago - 1 year 3 weeks ago #9637 by MikeS
Replied by MikeS on topic Now I just need a case.
Ian, sure, you can copy it - there's nothing new about what I did. The "socket pins" were from China via eBay. I think they're contacts for d-sub connectors (e.g. DB-25), but I can't find them from Digikey or Mouser in the US (they're probably cheaper from China, anyway).

Phil, the footprint I posted on another thread is slightly wrong - Ian had the anode numbering incorrect in the documentation, so a software change was needed to fix it. (I've now updated the Eagle file so it matches Ian's board) If you want, I have some extra unused B5991 (IN-12) boards, and I'll send you one for cheap (not trying to profit, but if I could get rid of the rest and cover my cost, that would be great). PM if interested. I'm thinking of a wood case similar to what you posted, I've got a bunch of ipe wood scraps left from building a deck. And, I think I want to make it more of an arch shape - if you look at the picture of the board, I made it so the top corners could be trimmed off (the diagonal lines), so it could be put in a smaller arch shaped case.

Next up, a smaller one using Burroughs B5861ST Nixies. (like the more common B5859, but with left-hand decimal, right-hand comma).
Last edit: 1 year 3 weeks ago by MikeS.

that'd be great. Also I don't mind changing the software in order to get it running. Unfortunately, I think sending the PCB from the US (assumption) to Germany might be unfeasible.

Less More
1 year 2 weeks ago #9658 by MikeS
Replied by MikeS on topic Now I just need a case.
The board only weights 22g, and will fit in a standard letter envelope. So, it looks like mailing one to Germany would only be $1.15USD. So, I'm thinking $5 would cover it. I've got more of the extended header sockets, tube pins, and through hole WS2812 LEDs on order, so if you don't want to source those locally or figure out alternatives, that would add to the cost ($10-15?).

It's odd that this site doesn't have any sort of PM function. I don't like posting my email address, because that's just a spam magnet even if obfuscated.