Less More
3 years 7 months ago #7269 by Zedsquared
Levitating Nixie Clock! was created by Zedsquared
Has anyone else joined in this campaign on kickstarter?

I initially went for the pre built clock but have since changed to the "experimenters edition" kit instead. I'll keep you filled in with progress when it arrives

Meanwhile ... what are people's thoughts on fine grid vs normal grid IN-8-2 ? Which do you prefer? The fine grid looks like it might be better from a distance but has a rather irregular appearance in all the closeups I've seen, like it was wrapped by hand (probably was!). I quite like the honeycomb aspect of the regular grid but it does appear to obscure quite a lot of the digits in the photos I've seen... go on, try to persuade me either way

Less More
3 years 7 months ago #7271 by Pacman223
Replied by Pacman223 on topic Re: Levitating Nixie Clock!
I put in a lot of hints to my wife, that this would be a great Christmas gift for me ... I just hope she got in... (She has backed a LOT of kick starters in the past, but she isn't much of a nixie fan

I think the floating clock is very cool. I must say I'm not a huge fan of the +- tube in the middle, but I think it looks fantastic floating like that.

As far as fine vs Norma grid .. Here is my experience.

I used 6 fine grid IN-14 tubes on a QTC clock, they look fantastic.. I think they appear very clear, almost western like (like a Burroughs tube). I got the tubes off eBay and actually paid a little less for them than normal grid tubes (lucky?)

I have a Sven in in-8-2 normal grid. I LOVE them.. The grid pattern adds ruggedness to the Nixie tubes, makes them more USSR looking to me.

I have a set of IN-8 tubes that are fine grid (for a future clock). They look good, but as you said, the grid appears to be not as uniform as would be expected. They were sort of expensive tubes, I'm not 100% sure they were worth the premium over regular IN-8 tubes.

I think any clock you make with the fine grid tubes will look great, but I can say that normal IN-8-2 tubes look GREAT.. (Probably my favorite Nixie tube I have used so far).


This reminds me I need to start working on a IN-8 clock with sockets. Maybe I'll use the small (if not tiny) board that Ian has. Actually that sounds like a really good idea...
The following user(s) said Thank You: Zedsquared

Less More
3 years 7 months ago #7273 by Ian
Replied by Ian on topic Re: Levitating Nixie Clock!
Here's a picture from the Kickstarter page: 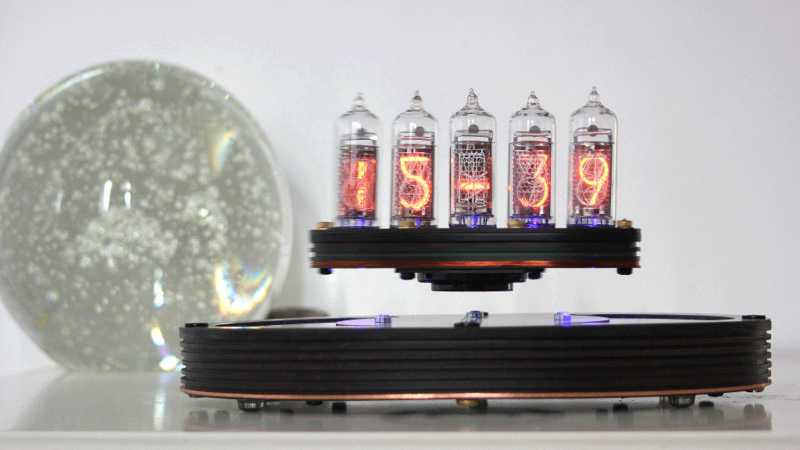 My comment here is that they did an fairly poor job on the photography of the leading photo on the page, much too much light on the tube grids, making them seem far too prominent.

In normal use with normal (i.e. not studio "flood") lighting, they are not at all that prominent.

The fine grid ones are still better, but I also like the "robustness" of the large grid tubes.

Less More
3 years 7 months ago #7286 by Zedsquared
Replied by Zedsquared on topic Re: Levitating Nixie Clock!
Thanks for the opinions, I tend to agree that the hex grid looks more "soviet" and find myself in two minds as to whether this is good or not

As the tubes are socketed and not absolutely outrageously priced I shall probably get both, after all you can never have too many nixies to hand, right?

Less More
3 years 2 months ago #7646 by Pacman223
Replied by Pacman223 on topic Re: Levitating Nixie Clock!
Any updates on this clock? have they shipped any of them?