I have built an arduino nixie clock more than a year ago.
It has been running fine for a year, although it has become a bit warm in the past. (I only run it a few hours a day, not all day long)

But now the mosfet has been so hot, there are burn marks on the board and the clock won't display numbers anymore.

I have tested the following, but nothing made a difference.
I have replaced the mosfet with an IRF740 which a friend of mine had laying around.
I have replaced the arduino with an other original one.
I have desoldered and tested all HV components, but they appear to be fine.
I have powered on the clock with the button pressed. The LED's start flashing, but the nixies stay black.
I have tried with and without the ldr.
On the 170v test point I get about 107 to 130Volts (which seems too low), on the 5v test point I get 5 volts.
The Mosfet becomes too hot to touch in about 10 seconds.
I used a 12V 2500mA adapter before, now I use a 9V 1000mA adapter.

If anyone has pointers where to look, I would be greatfull, because I love my clock

Less More
9 months 1 week ago #12705 by Ty_Eeberfest
Replied by Ty_Eeberfest on topic Problem with Arduino Nixie Clock
Exactly which clock do you have? Your thread title implies that it might be the version that plugs on to an UNO as a shield but I don't want to assume. If you don't know the model name then a picture would work.

You are correct that the test point readings are too low. If it was working right you would see 170VDC there.

Did you test the inductor in the high voltage circuit? If so, how? There have been a few reports of those inductors failing with what's probably an internal short resulting in decreased inductance and also decreased DC resistance.
Look into it later when the dust is clearing off the crater.

Less More
9 months 1 week ago #12707 by KRiZ
Replied by KRiZ on topic Problem with Arduino Nixie Clock
Hi,
thanks for the reply.

You assumed right, my clock is an Arduino Uno All-In-One 6-digit clock: www.nixieclock.biz/StoreArduinoAllInOne.html

I have tested the inductor by desoldering it and tested with an LCR-TC1, in which the outcome was about the same as the specs.
I also have tested it in another testing device like the LCR-TC1, but that one recognised it as a resistor.
I don't know how to test it while in the circuit.

I do see that the inductor also gets warm, I don't know if it is normal or not. 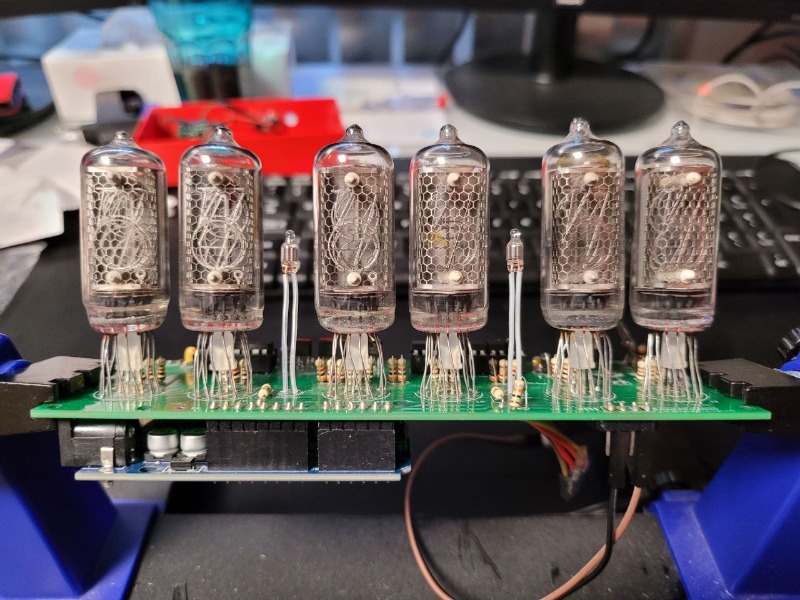 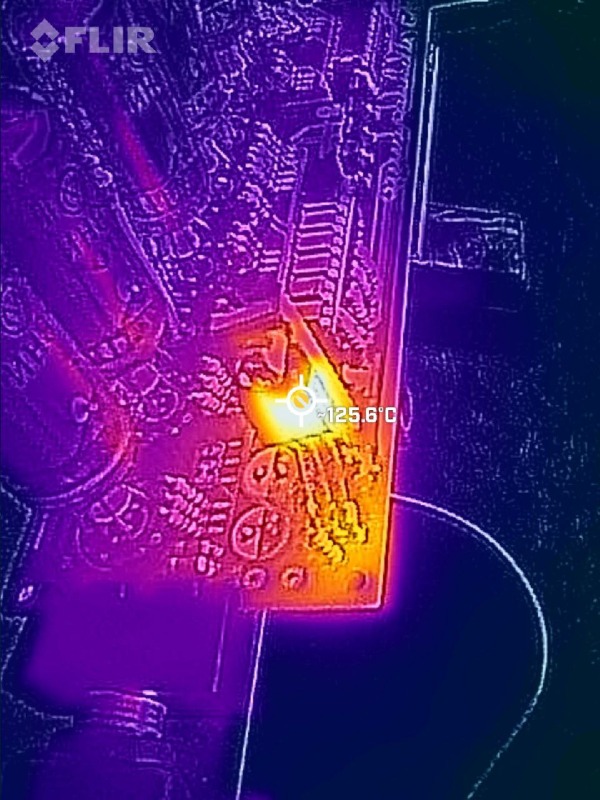 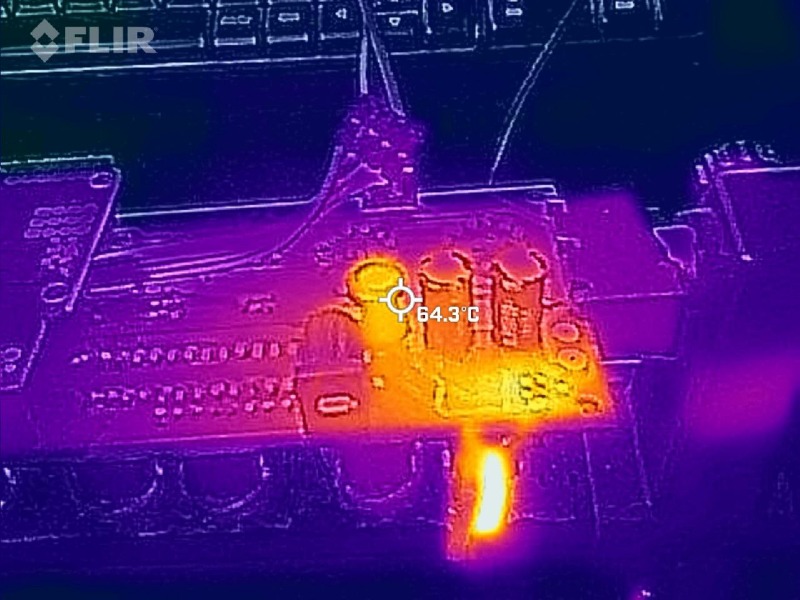 Less More
9 months 1 week ago #12710 by Ty_Eeberfest
Replied by Ty_Eeberfest on topic Problem with Arduino Nixie Clock
Okay, I'm going to say the inductor is most likely not part of the problem. Its heating up is a symptom of something else.

The current draws you measured are ridiculously high. About 300mA is typically the max for a properly functioning board.

The high current and the heat together are telling me that the MOSFET is either never turning off or at least being held on for too long, or perhaps the gate drive voltage is low for some reason causing the MOSFET to operate in the linear region instead of turning on solidly.

Do you have a scope? A lot could be learned by looking at the amplitude, duty cycle and frequency of the signal on the gate of the MOSFET.
Look into it later when the dust is clearing off the crater.

The pulses come in bursts (groups). Here, with a slow sweep of 5ms/div, you can see the bursts. 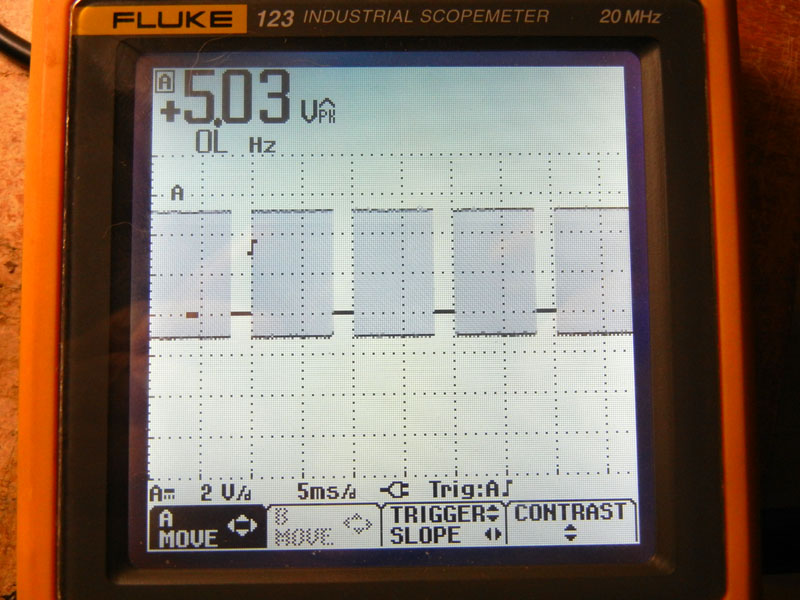 Here, with a much faster sweep of 20us/div, you can see the series of pulses that make up a burst. Note the duty cycle is about 40%. This will vary depending on your external power supply and a number of other factors, but should not go to extremes. 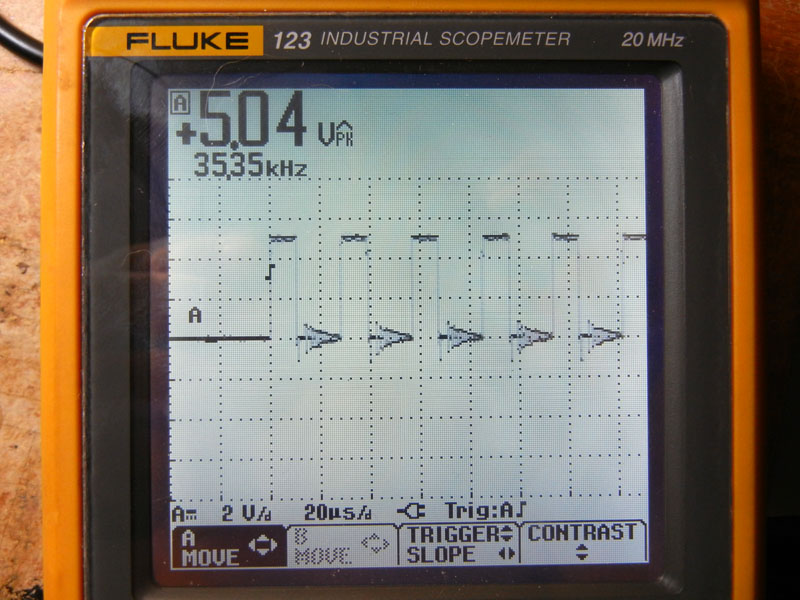 The ringing when the signal goes low is just "one of those things" and is nothing to be concerned about unless it's much more drastic on your board.
Look into it later when the dust is clearing off the crater.

Less More
9 months 1 week ago #12712 by Ian
Replied by Ian on topic Problem with Arduino Nixie Clock
My money is also on the inductor. They can degrade over time and the insulation on adjacent turns of the winding can break down, causing a short between the windings - that causes the inductance to reduce. This will mean that the inductor reaches saturation quicker and that's when the heat increases in both the mosfet and the inductor.

The traces from Ty are really useful: If the frequency produced by the Arduino is not right (too low), this will heat the inductor up, speeding the breakdown up. The inductors are also a bit hit and miss with the inductance. They are +/- 20% and that's fine if we're to the higher side, but it's a problem at -20%. Although it says 100uH on the parts list, I supply 150uH inductors now, to make sure that we err on the high side.