Less More
2 years 3 weeks ago - 2 years 3 weeks ago #9668 by Stackerlee
Replied by Stackerlee on topic WiFi time provider with NTP support.
@MikeS That's very kind! Thanks for taking the time!
Unfortunately I can't get the NTP time again (have done a reset on the clock firmware).
The settings page shows: "Using 12C protocol: Unknown" and settings can't be changed. 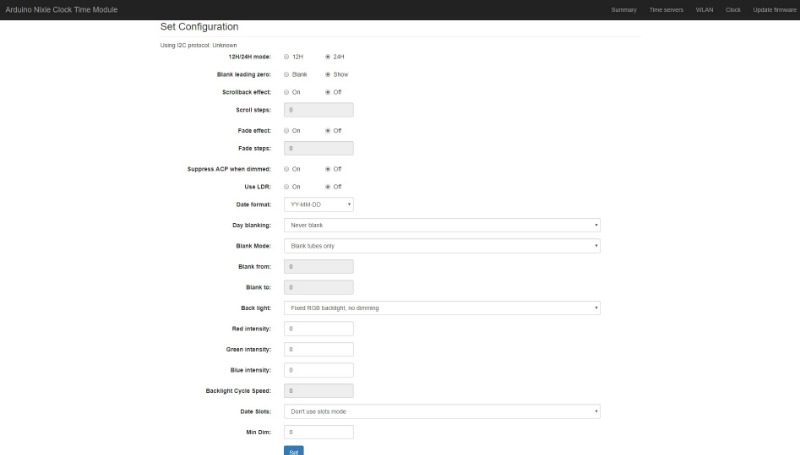 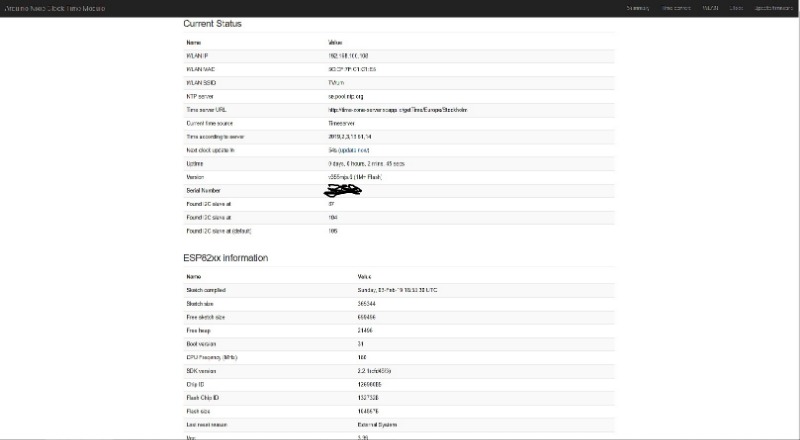 Will try some more...

Edit: just saw your update. Will try. Thanks!

Less More
2 years 3 weeks ago - 2 years 3 weeks ago #9669 by Stackerlee
Replied by Stackerlee on topic WiFi time provider with NTP support.
I'm not completely sure I got the updated file
www.flatsurface.com/nixie/files/WifiTime...P8266-v355mjs.6b.zip
(?)
However I was able to do an OTA update after which the NTP time was working.
Could not get it to work with the zipped .ino-file though.

On the settings page it still shows: Using I2C protocol: Unknown
and settings doesn't stick. Some of them are grayed out and can't be changed.
http://bayimg.com/KAnpDAAGC
Getting the NTP-server working is good enough for me, I can change the settings from the clock (I think).
Thanks for your help!
Last edit: 2 years 3 weeks ago by Stackerlee. Reason: spelling

Less More
2 years 3 weeks ago - 2 years 3 weeks ago #9670 by MikeS
Replied by MikeS on topic WiFi time provider with NTP support.
That's the right file, as long as you re-downloaded it. I didn't change the name because I don't want to leave a bunch of links to beta code laying around.

When you compile and flash, use the settings as shown at the top of the .ino. When reflashing, there's no reason to wipe anything but the sketch - "Erase flash: Only sketch." Yes, you can use the "ESP8285" board for programming an ESP8266, I use that because it will work with both (as long as your 8266 has 1MB of flash). I haven't had any issues with getting NTP sync after programming with a programmer, as long as I do that.

The other way to do it is to chose Sketch/Export compiled binary, then Sketch/Show sketch folder. The binary you can OTA update with will be there.

NTP tries a few time when it's first powered up, so when starting fresh it's long past that point by the time you configure WLAN, and then it may take a while to come up. So, try doing a power cycle after doing a fresh config. You might also try picking a server closer to you: www.ntppool.org/en/

I'll have to "punt" on it working with V1. From what I can see, it shouldn't come back with "Using I2C protocol: Unknown" if you have a V1 clock running v55 code. But I don't have anyway to test.
Last edit: 2 years 3 weeks ago by MikeS.

Less More
2 years 3 weeks ago #9683 by MikeS
Replied by MikeS on topic WiFi time provider with NTP support.
I found an issue with the library I'm using for NTP. It changes between standard time and summertime at the wrong point (closer to UTC than local time, so +/- hours different, depending on your timezone). I logged a bug, and the library author will hopefully fix it before the next change.

But, if you're running it, just expect the unexpected when the next summertime change happens.

Less More
2 years 2 weeks ago - 2 years 2 weeks ago #9697 by MikeS
Replied by MikeS on topic WiFi time provider with NTP support.
Update. I loaded slightly modified (doesn't do any of the HV or factory reset stuff) V1 code on an Uno, and the WiFi code on a NodeMCU. Worked great for testing, because the I2C pins line up so the NodeMCU can simply plug into the UNO (NodeMCU pins D3/D4 into Uno pins A4/A5, plus some others which don't hurt anything).

Anyway, the current code seems to talk to V1 clock code just fine, it finds the "clock" on the I2C bus, and can program the settings. With a V1 clock, it should say "Communicating with: NixieFirmwareV1, I2C v54" at the top of the Clock page.

This version also has a fix for the DST bug in the ezTime library.

Give it a try here (I updated all the earlier links in this thread, too). If you're running an older version of mine, you can just OTA update using the included .bin file. It should work with both V1 and V2 clocks.

Less More
2 years 2 weeks ago #9704 by Ian
Replied by Ian on topic WiFi time provider with NTP support.
Hi Mike, thanks for that, I'm in big poo at work at the moment, in fact I'm heading back to work this evening so I can have a good run at solving issues before the week starts. I'll take a look at it as soon as I can get my head above water.