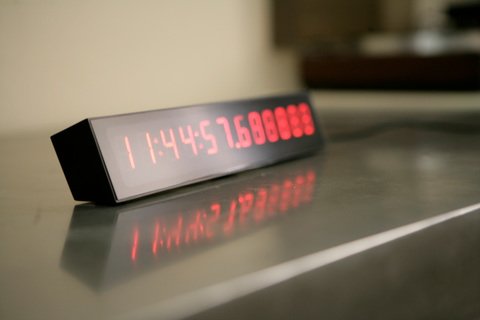 As best as I can tell, I believe this is just a concept clock. The claim to fame is that the clock has enough decimal points in the seconds position to count in the millionths of a second. I doubt the internal oscellator is that accurate - but I don’t think I would be able to notice if it was off by a little bit. 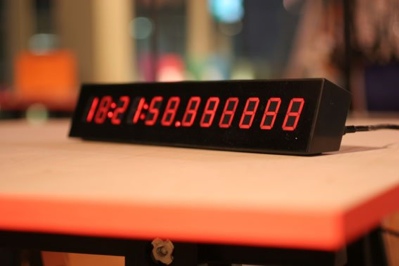 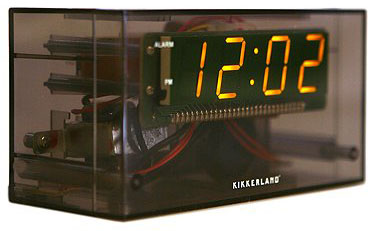 This is an interesting one. There is nothing technically interesting about the clock but the two features that make it stand out are the amber colored display and the clear housing. It has a pretty simple design - it is just a brick but for $20, you can’t go wrong.

The only problem is that it is no longer for sale. I originally found this one on the Urban Outfitters website but they no longer have it in stock and Kikkerland does not seem to have it on their site. Oh well :-/ 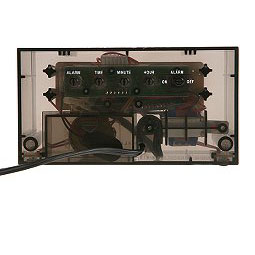 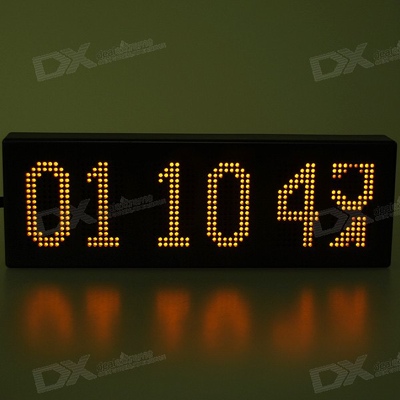 I will be the first to admit that this clock is ugly. The only thing that saves this clock is the well executed LED display. It is unclear between the photos on DealExtreme.com whether this clock is orange or red, but I have seen videos and photos of both.

One word of caution: This clock does not run on 110v. This poses two distinct problems. The first one is that you will need to find a power converter for it. Not a big deal but it is a pain. Second, if it derives its clock from the mains line, it will be expecting a 50Hz reference and in the US, it will be getting a 60Hz reference instead. I don’t know if it uses the mains line for reference or has its own internal oscillator.

ThinkGeek just recently released a clock that is a little unusual. Instead of focusing on weird LED displays or retro nixie tubes, they built a clock on a long-dead technology: flip clocks. I could try and explain them but I think Wikipedia does a better job. Read the description and see the videos after the jump. 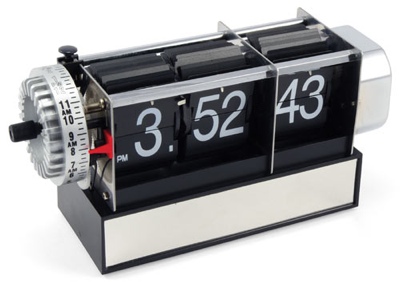 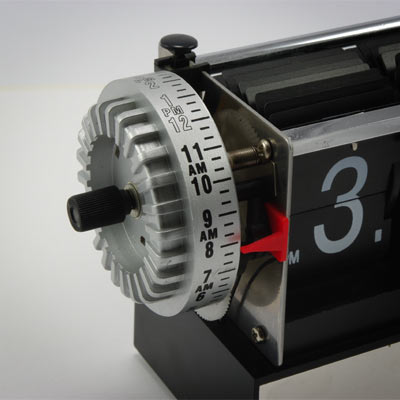 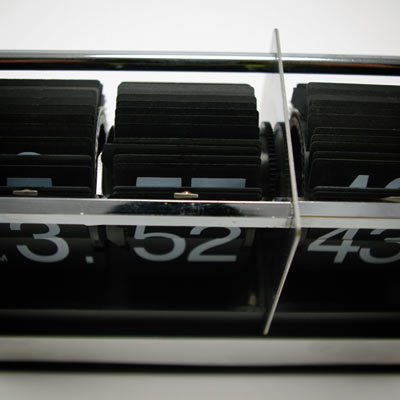 The faster wheel has connected to it a ring of 60 flat plastic “leaves”. On the “leaves” are printed numerals so that, when you hold two adjacent “leaves” apart like an open book, the two open “leaves” spell out a numeral, and flipping a “leaf” increases the number shown by 1 unit. The “book” is opened vertically, and its pages form a ring. This ring is put into position and rotated so that one page falls each minute, showing a new number for the minutes. “Leaves” 45 through 59 have a small tooth on them. The purpose of this tooth is explained later.

The slower wheel has connected to it a similar ring of “leaves”, but there are only 48 “leaves” on this ring. These “leaves” have hour numbers printed on them. There are two of each hour, like this: 12am, 12am, 1am, 1am, 2am, 2am, … 11pm, 11pm. One leaf falls each half-hour, at approximately 25 and 55 minutes after the hour. A different design features 60 “leaves” with the numbers 1 to 12 repeated in fives, each leaf falling after 12 minutes. The disadvantage of this is that there is no way to show “AM” or “PM” information.

The teeth on the minute leaves are used as follows: at 45 minutes after the hour, the tooth pushes a lever which will catch any falling hour leaf. The lever holds the old hour leaf in place until it is time for the new hour to start.

Some measure time with a pendulum. Others measure it with springs. Still others rely on crystals. We monkeys prefer monitoring the subtle oscillations of cesium atoms in a vacuum. Pick your own way - make it yours. See, Time is a constant companion and should be feared and respected.

Even Gollum knew all about Time. It can slay kings, ruin towns and beat high mountains down. Time can let you know when you need to catch the train, or when the latest episode of The Guild is online. Still, time is an abstract concept. Most animals don’t understand why their instincts tell them to start swimming upstream to spawn, but we higher-apes need our day violently split into 86,400 seconds just so we can get things done. We turned time into an absolute - something to be measured, labeled and tamed.

This clock is unique in that its mechanism is exposed for all to see. Notice how the plates rotate against a bent metal finger that releases them only when it is the next plate’s turn to fall. Watch the curious dance - the harmony of motors and gears. See, originally this clock had a case covering it, but through a happy accident, it was forgotten. It looks even cooler the way it is, so there you have it.

Buy it now from ThinkGeek.com