Less More
1 year 4 months ago #9805 by Ian
Replied by Ian on topic IN-8-2 Modular Rev 3 build - feedback and questions
Hi Ty, thanks for that input. The code around that part is very old and has not been looked at (by me, at least) for a LONG time. Let me replicate what you have done and test it out.

The idea of the slow change was to make it so that never needs to be maintained, but I'm aware of the flicker.

I'll report back in a couple of days. I'm doing a major upgrade on the firmware at the moment, and I need to get that through before I start on other stuff.

Less More
1 year 4 months ago #9807 by Ty_Eeberfest
Replied by Ty_Eeberfest on topic IN-8-2 Modular Rev 3 build - feedback and questions
Here's another radical suggestion: next time you design a new board that needs an HV generator, consider that MAX1771 chips are cheap, they use the same external components as your existing HV generator design, there are a number of proven 170VDC reference designs on the 'net, and the result is a really tight power supply with no calibration (aside from tweaking in a pot once) or maintenance required. Yes, I like my boost converters to be implemented in hardware

Look into it later when the dust is clearing off the crater.

Less More
1 year 4 months ago #9813 by Ian
Replied by Ian on topic IN-8-2 Modular Rev 3 build - feedback and questions
Hi Ty, in fact the new designs I have all use a hardware converter. I am still hunting the holy grail of having a cheap, reliable, powerful HVSMPS that runs off 5V.

Less More
1 year 4 months ago #9814 by Ty_Eeberfest
Replied by Ty_Eeberfest on topic IN-8-2 Modular Rev 3 build - feedback and questions
Personally I'm content with HVSMPS that run off of 12VDC. But I suppose you are wanting to run off of USB ports or "power banks". Seems to me that a 6 tube clock running on 5V will be on the hairy edge, current-wise, of what some USB ports will happily deliver. But I guess the whole world runs on USB-C connectors now.

Also, have you ever checked out a Chinese chip maker called Bright Power? I don't have a specific chip in mind but the company seems to specialize in chips for power conversion and regulation applications. You may have to learn Chinese to read some of their data sheets though.
Look into it later when the dust is clearing off the crater.

Less More
1 year 4 months ago #9834 by Ian
Replied by Ian on topic IN-8-2 Modular Rev 3 build - feedback and questions
Transformers. Strangely, it makes the electrical design easier: you don't need special MOSFETs, because they only have to deal with the primary side, and with a 1:5 or 1:10 step up, we're talking about max 40V. However, that is more than offset by the extra fiddling that transformer circuits bring on the placing of components and getting the efficiency.

I ordered a few step up transformers, but didn't get round to finishing the design yet. It's YET ANOTHER THING on the bottom of the list of things to do.

The other possibility is a voltage doubler circuit. I usually run on 9V -> 180V, so 5V to 90V with a doubler should also work. Add that to the list as well...

Less More
1 year 4 months ago - 1 year 4 months ago #9836 by Phil_Mod3
Replied by Phil_Mod3 on topic IN-8-2 Modular Rev 3 build - feedback and questions
Ok, I played around a little bit and learned a few things about timers and counters, and also on bit-wise operators.
As I wrote before, the HV generator of my clock is rather noisy and the intensity of the tubes flickers. In the following, you'll see a scope read which gives you an overview of the HV drive and HV signal itself, both obtained on the respective testing points. The drive signal is in yellow, the HV in blue. 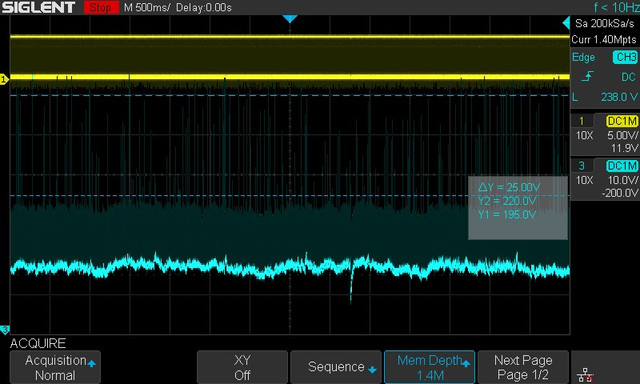 As you can see, the HV signal has many spikes (faint blue lines), which even go above 220 V in my case. Target HV was set to 175 V. PWM ON at 180, which was defined by the calibration routine. But you can also see that the majority of HV readings (thick blue line) has quite some ups and downs. Also, when the transition between time and date occurs, we see an overshoot of the HV (see following image). 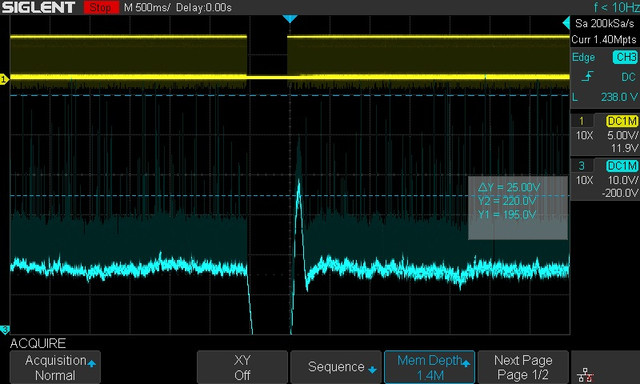 I am using an IRF640, which is specified for a max Vds of 200V. Until now, it is still doing ok, but I am not sure if I'd recommend using it. Now if you disable the checkHVVoltage() in the main loop(), the curve smoothens considerably (see following image). 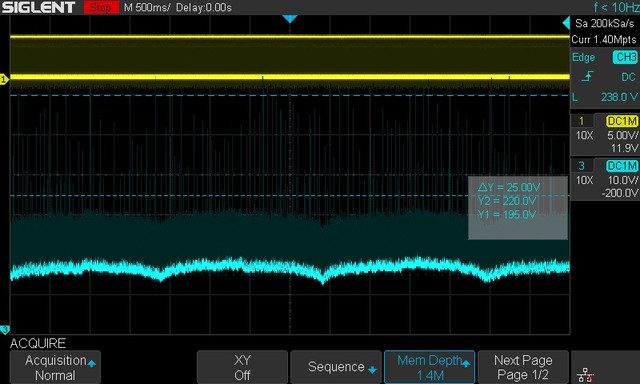 Also you get rid of the overshoot of HV at the transition from time to date (see following image). 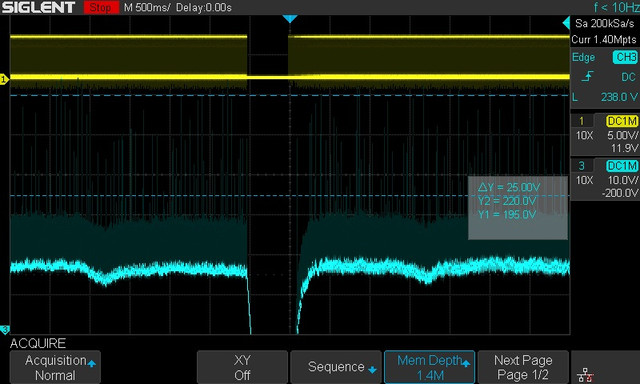 Unfortunately, you still get all the HV spikes which go up to 225V. When triggering on these events 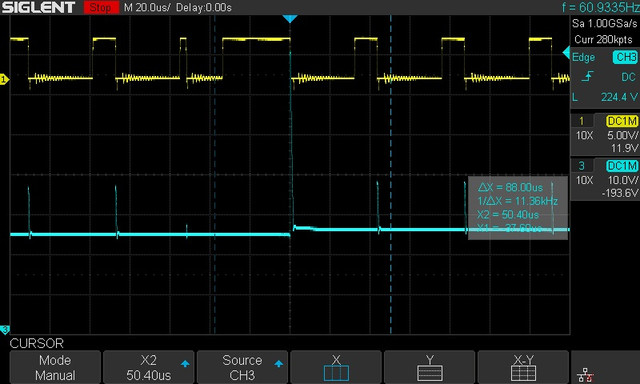 we see that the HV drive pulse has a glitch. There is one very short pulse followed by a very long pulse. When switching off the long pulse, a voltage spike is induced. Also the occurence of these spikes correlates with the noise of my clock.

It turns out that this is caused by how the HV is "switched" on and off: The current code connects the output pin (OC1A) to the timer/counter 1 by setting the COM1A1 bit and disconnects the pin by clearing the bit. But the counter is not stopped or reset when disconnecting, it just keeps counting. When re-connecting the pin, the output is often resulting in erroneously long pulses. This can be solved by clearing the counter, right before re-connecting the pin. Just addright beforein line ~2407 of the code. When doing so, these very high HV spikes disappeared (see following image), as did the noise of the clock. 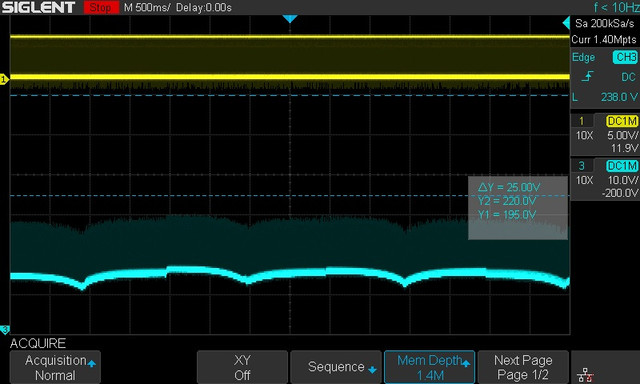 Would be good if anybody could try to replicate this.

Regarding the checkHVVoltage(): I'd disable it. However, I see a problem when trying to change HV-settings online, since this relies on this function.

Looking forward to your feedback.

(Make sure to look at the full-screen images)
Last edit: 1 year 4 months ago by Phil_Mod3. Reason: E1: Typo E2: Even more typos
The following user(s) said Thank You: Ian, MikeS